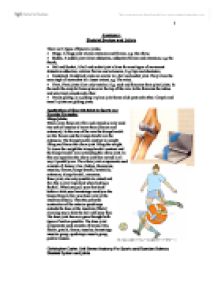 Anatomy; Skeletal System and Joints There are 6 types of Synovial joints; * Hinge, A hinge joint allows extension and flexion, e.g. the elbow, * Saddle, A saddle joint allows abduction, adduction flexion and extension, e.g. the thumb, * Ball and Socket, A ball and socket joint allows for most types of movement abduction adduction, rotation flexion and extension, E.g. hips and shoulders, * Condyloid, Condyloid joints are similar to a ball and socket joint. They allow the same type of movement to a lesser extent, e.g. The wrist, * Pivot, Pivot joints allow only rotation. E.g. neck and forearms have pivot joints. In the neck the occipital bone spins over the top of the axis. In the forearms the radius and ulna twist around each other. * Freely gliding, in a gliding or plane joint bones slide past each other. Carpals and tarsal's joints are gliding joints. Applications of Synovial Joints to Sports and Exercise Examples. Hinge joints; Elbow joint; these only flex and extend so only need two sets of muscles to move them (flexors and extensors). In the case of the arm the biceps brachii are the flexors and the triceps brachii are the extensors. The biceps brachii contract in weight lifting and flexes the elbow joint lifting the weight. To lower the weight the triceps brachii contract and the biceps brachii relax extending the elbow joint. In this one repetition the elbow joint has moved in all way it possibly can. The elbow joint components used consists of; bones; Ulna, Radius, Humorous; muscles; flexors; biceps brachii, brachialis; extensors; triceps brachii, anconeus. Knee joint; also only possible to extend and flex this is very important when kicking a football. When you pull your foot back before a kick your hamstrings mostly so the biceps femoris flex your knee joint at the insertion (fibula). Then the powerful contraction of the anterior quadriceps extends the knee at the insertion (fibula) ...read more.

For example when a tennis player serves the ball the ball is secured in the hand with the fingers metacarpals. They are adapt for good gripping properties due to their shape making them good for securing the tennis ball the metacarpals in the hand only allow for flexion and extension because their joints are hinge joints this movement being restricted to only flexion and extension allows for a controllable grip for tennis as the fingers will not abduct and adduct. Anterior View of the Arm and Shoulder Taken from http://www.lrn.org/Graphics/Skeletal/pectoral.gif The Clavicle, it can be felt throughout its entire span in any human regardless of obesity. At the inner end is the enlarged sternal extremity where the bone is above the upper margin of the sternum. This can also be felt quite easily forming with the sterno-mastiod a V-shaped notch, the pre-sternal notch. Passing out ward is the shaft of the bone that can be felt immediately under the skin. The clavicle or collarbone is at the anterior part of the shoulder. The clavicle is a long bone that has a curve in its shaft. It can be found placed horizontally at the anterior view of the thorax just above your first rib. Its articulations are with the inner extremity of the sternum and by its outer extremity with the scapula, allowing for great latitudinal motion in the arm. (Dr. Gray, 1901 p135-137). The clavicle helps to protects the humerus. The flattened portion; the outer third is flattened from above and downwards giving it two surfaces; upper & lower also two borders; anterior & posterior. The upper surface is flat and roughed it is marked by impressions of the deltoid attachment in front and impressions are also made by the trapezius behind. In-between those two impressions is a small part of bone, the under surface is flattened. At its posterior border is the conoid tubercle it surmounts the coracoid process of the scapula and gives attachment to the conoid ligament. ...read more.

The pelvis thus acts as a unit in all bodily movements. The weight of the trunk is transferred from the spine through the sacrum and then through the hipbone to the thighbone and the lower extremities. Conversely, all forces acting on the lower limbs are transmitted to the trunk by the same route. Sacroiliac Joint, fibrous joint in the lower back between the lumbar vertebrae and the coccyx, the bones at the lower end of the spinal column. It is composed of five fused vertebrae that form a solid triangular bone (the sacrum), and the ilium parts of the two hipbones. Once believed to be the site of sprain and lower back pain, powerful ligaments that avert injury in fact bind it. A displaced vertebral disc more generally causes such pain. Taken from: Microsoft (r) Encarta (r) Encyclopaedia 2005 (c) 1993-2004 Microsoft Corporation. All rights reserved. The structure of the pelvis allows for the hips a (ball and socket joint) to be present to allow for all types of movement which is useful in many sports especially in rhythmic gymnastics as practically every movement possible is required, e.g. the splits require you to abduct both legs then adduct a front kick required flexion of the hips and a spin may require rotation, all of which supplied by the ball and socket joint. This wide range of movement has applications to many sports and exercise examples. The ball and socket joint in the hip is supported in the pelvis, this allowing for all types of movement meaning that a person can side step walk backwards forwards and rotate their leg. In football all of these types of movement are needed, the pelvis and femur ball and socket joint when running to tackle a player, needs to flex and extend and if the player needs to quickly move out of the way of someone else they need to abduct then adduct their legs one after the other to be able to side step out of the way. Reference List: Text references; Greys anatomy, 1901, Dr Henry Gray www.wikipedia. ...read more.