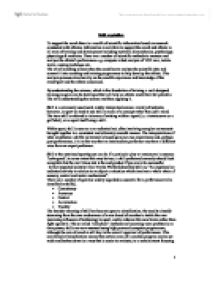 Skill acquisition To support the coach there is a wealth of scientific information based on research conducted with athletes. Information is available to support the coach and athlete in all areas of training and development including nutrition, biomechanics, psychology, physiology & medicine. There are a number of scientific methods to measure and analyse the athlete's performance e.g. computer aided analysis of VO2 max, lactate levels, running technique etc. The art of coaching comes when the coach has to analyse the scientific data and convert it into coaching and training programmes to help develop the athlete. This analysis process relies heavily on the coach's experience and knowledge of the event/sport and the athlete concerned. By understanding the science, which is the foundation of training, a well designed training program can be developed that will help an athlete reach their full potential. The art is understanding the science and then applying it. Skill is a commonly used word, widely interpreted across a variety of subjects; however, in sport we tend to use skill as more of a concept rather than just a word. The term skill is referred to in terms of existing within a sport (i.e. a tennis serve or a golf shot), or as sport itself being a skill. Within sport, skill is seen as a co-ordinated act, often involving complex movements brought together in a consistent and ultimately smooth manner. ...read more.

If you are of average height, strong, good coordination and have an abundance of fast twitch fibres in your legs then you have the natural ability to be a sprinter If we are to apply the above terms to specific sports we see that some skills, abilities and techniques are similar in different sports, whilst completely different in other areas. For example a comparison can be made between a golfers swing, and a top-spin shot in tennis, or a cricket shot; all three skills are similar in the fact that they involve a swing of the arm to make contact with a ball, they each of course, have different techniques, a golf swing hits a stationary ball whilst tennis and cricket deal with a moving ball. It is in this way also that they require different abilities, since in golf the ball is stationary the manipulation of any spin onto the ball to navigate the course is solely down to the golfer themselves, in tennis and cricket the player has to return a ball, usually already spinning towards them having been manipulated by their opponent in order to beat them. The success of the reading of this manipulation of the ball towards a player can be determined by the level of the performer, with experience and knowledge a player can read these signs better and quicker by enhancing their perceptual skills. Some sports have similar abilities required such as table tennis and tennis, where there is common ground over the aim - to beat your opponent, and in making shots, by applying and reading spin on the ball. ...read more.

i.e. a penalty flick in hockey. Serial Skills are a group of discrete skills strung together to make a new and complex movement. i.e. the sequence of skills for the triple jump. Continuous skills have no obvious beginning or end. The end of one cycle of movements is the beginning of the next, and the skill is repeated like a cycle. These skills could be stopped at any moment during the performance of the skill. i.e. Swimming, Running, Cycling. Individual, Coactive and Interactive skills Individual skills are those performed in isolation. e.g. Figure Skating, high jump Coactive skills are those performed at the same time as others but without direct confrontation. e.g. running, swimming Interactive skills are those performed where other performers are directly involved. e.g. rugby, football, basketball, netball, where a high degree of perceptual skill, required to consider all the factors is required and often honed whilst competing in what are effectively team sports . Self and Externally paced skills Self paced skills are those that are instigated by the performer and externally paced skills are those where the timing of the performance of the skill is not controlled by the performer, but by an outside instigator. The classic examples of self paced skills are that of the golf swing and the snooker shot, both require no limit on the time taken for either, although one has to take into consideration the aspect of sportsmanship, whereas a externally paced skill, a return of tennis serve for instance can often only be performed once your opponent has performed their action, a reactionary skill essentially, requiring obviously high perceptual skills. ...read more.