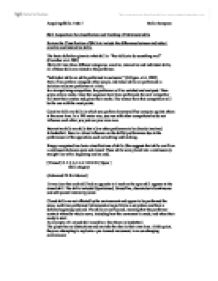 Skill Acquisition: the classification and Teaching of Movement skills - Review the Classification of Skills to include the differences between individual, coactive and interactive skills.

Skill Acquisition: the classification and Teaching of Movement skills Review the Classification of Skills to include the differences between individual, coactive and interactive skills. The basic definition given to what skill is- "the ability to do something well" (Crowther et.al.1995) Skills fall into three different categories; coactive, interactive and individual skills; all of these skills are related to the performer. "Individual skills are skills performed in seclusion." (Gilligan. et al. 2000) Even if we perform alongside other people, individual skills are performed in isolation-only one performer at a time. In a trampolining competition, the performer will be watched and analysed. Then given certain marks. Once the sequence have been performed, the next competitor will start their routine and given their marks. The winner from this competition will be the one with the most points. Coactive skills are skills in which you perform by yourself but compete against others at the same time. In a 100-meter race, you run with other competitors but do not influence each other you just run your own race. Interactive skills are skills that allow other performers to be directly involved. In basketball, there is a direct influence on the skilful performance due to the performance of the opposition-such as tackling and blocking. Knapp recognised two basic classifications of skills. ...read more.

An example of a gross skill would be shot putt. In shot putt, there are a lot of muscle used a sit it is a gross movement and the weight gets transferred from one area of the body to the next. The main muscles used are the arm muscles, deltoid, biceps, triceps and also the smaller muscle groups in the forearm, including the flexor and the extensor carpi. Fine skills involve accurate movements using the small muscle groups. In snooker, hardly any physical activities are needed; the game is about skilful hand eye co-ordination. The muscles used in taking a snooker shot are in the forearm. The wrist also has a lot to do with the shot that is about to be made its controls the speed at which the energy is transferred from the arm to the cue and controls which direction at what angle the cue hits the ball. Discrete, serial and continuous skills are the options of how well defined the beginning and end of the skill is, they have a clear beginning and an end. An example would be a serve in badminton. It is clear where the beginning and end is. ...read more.

Applying different types of training will be helpful in different areas. To practise for open and interactive skills variable practise would be ideal. Variable practise is when a skill is practised in a variety of different situations and the sportsperson will experience the full range of circumstances in which the sport involves. The learner can use different environments to practice, allowing both the development of the skill and the ability to adapt the skill to a range of possible situations. Fixed practise is when a specific movement is practised repeatedly. Closed, interactive and coactive skills tend to require fixed practice to allow the motor sequence to be perfected, since they will remain the same in practice, as they will in competition they do not require adapting to the environment. It is clear that all these skills are all interlinked together one way or another and sometimes you can get some sports executing both opposites skills such as in table tennis, the skills being performed can be open and closed depending on other variations how other skills come into practise with these two particular skills. Advanced PE for Edexcel (2000) Publishers- Heinemann, Oxford UK Advanced Physical Education & Sport (2000) Publishers- Stanley Thornes, Cheltenam UK www.google.co.uk www.brianmac.co.uk Word count- 1278 Acquiring Skills. Task 1 Hollie Kempson ...read more.