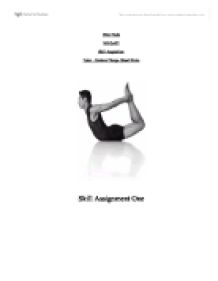 Peter Finch ND Golf 2 Skill Acquisition Tutor - Graham Thorpe, Stuart Blaire Skill Assignment One Task One Define skill and explain what makes a skilful performance What is a skill? "Skill is an athlete's ability to choose and perform the right techniques at the right time, successfully, regularly and with a minimum of effort. Athletes use their skill to achieve athletic objectives e.g. sprinting a 10.0 second 100m. Skill is acquired and therefore has to be learned." Taken from www.brianmac.demon.co.uk There is a large range of sporting activities each requiring a set of skills. Skills have many characteristics that can change in different situations, which makes classifying them difficult. A skilful performance is the ability to perform an activity with maximum efficiency and minimal waste, a successful player in sport has more skill than a less successful one. Skill is defined through multiple classification systems, however the below are a brief outline into how skill is identified * how precise a movement is * whether the movement has a definite beginning and end * whether the environment affects the performance of the skill Task two ...read more.

These skills involve reaction, and are usually open skills. For example in ball games the performer must time their actions with the actions of other players and the ball. Open skills: in sports such as rugby, football, and cricket open skills are primarily used. These sports involve a majority of open skills because the sporting environment is constantly changing and so the athlete's movements have to be continually changed and adapted. Therefore the skills are mostly perceptual. The skill is also externally paced, for example a cricket bowler bowling. Closed skills. These skills take place in a closed, predictable and more stable environment than open skills. In this skill the performer knows exactly what to do and when. So the surrounding environment does not vastly affect these skills. Closed skill movements follow set patterns and have a clear beginning and end. The skills are self-paced, for example a penalty kick in football, or tennis serve. Discrete skills: these are brief, well-defined movements that have a clear beginning and end. ...read more.

Taken from www.brianmac.demon.co.uk So the relation between skill and ability are clear, we are all born with varying amounts of raw ability, and it is these abilities which we build our skills upon. So basically if a person was born with a lot of natural strength then building muscle around this ability is to build up our skill level. In 1982 L M Stallings identified the below as natural psychomotor abilities: 1. Muscular power and endurance 2. Flexibility 3. Balance 4. Co-ordination 5. Differential relaxation (selective adjustment of muscle tension). Task 4 Distinguish between learning and performance Learning is a fundamental of being able to perform any movement, from having the first steps of a child to modelling a finely tuned athletic movement we are learning through out our lives. The environment we are competing in also determines how we learn, an athlete who learns his skills in a competitive situation will perform better in competitions. Unlike an athlete who practices soundly but come to a competition and collapses because of the pressure involved in competing. Learning is the ability to take new information on board, performance is translating this information from practice and applying the motion in performance. ...read more.