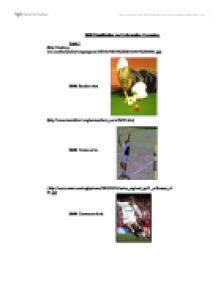 Skill Classification and Information Processing Task 1 (http://media.g-win.com/betweekly/images/game16/STEPHEN%20HENDRY%20MBE.jpg) Skill: Snooker shot. (http://www.tennisforall.org/serves/chela_serve%201.htm) Skill: Tennis serve. ( http://www.cnnsi.com/rugby/news/2001/02/03/wales_england_ap/t1_wilkinson_all-01.jpg) Skill: Conversion kick. (http://www.deccanherald.com/deccanherald/oct01/img/cricket.jpg) Skill: Cricket shot (sweep). (http://www.theposh.premiumtv.co.uk/content/pete/media/db/S25/156621.JPEG) Skill: Football pass (side footed ground pass). (http://www.boxingpress.de/fotos/lewis-botha-ko-punch-01.jpg) Skill: Boxing punch (Hook). 1. The tennis serve is the most skilful out of all the 6 skills I have chosen because it matches these 7 points that recognise a skilled performance: Learned Goal Orientated Aesthetic Successful Consistent Economic (in terms of time/energy) Cognitively Processed The tennis serve requires a lot of practice to groove the skill into the long-term memory, to be able to produce a powerful, accurate and effective service it requires a huge amount of learning. The serve is so vital for that the game that professional players will dedicate a large amount of their practise to learning how to serve accurately with power. The serve is definitely goal orientated because the service can easily win you the point/game and if your serve is strong enough it can dominate and control the whole match. The service can ace the opponent or it can be good enough that the opponent has to return with a poor shot giving you a chance to take the point. When a tennis service is carried out with skill an finesse it can be very aesthetically pleasing, if the technique is perfect and the serve has a lot of power it looks smooth and well learned. It is very difficult to make a service successful, it either needs to be out swinging toward the inner side of the service box or hit with a lot of power to the far corner of the service box. Although it's very hard to hit these spots with the right power when the server does achieve in reaching these points it often results in a successful serve. Possibly most difficult part of carrying out a skilful tennis serve is being able to do it consistently, the server has to follow the perceptual traces they have in there long-term memory perfectly. ...read more.

The abilities needed to carry out a well executed punch are: Speed Power Balance Co-ordination Reaction Time Timing Agility Speed is required for the boxer to throw his punch quick enough so that the opponent has the smallest amount of time possible in order to react to the punch so that he can't block the punch or throw a counter punch. Power is necessary to simply make the punch do as much damage to the opposition as possible, although some punches don't have to be very powerful, jabs for instance, however they still require some power to wear the other boxer down. Jabs often are a set up punch for a hook or uppercut that requires much more power and when they land accurately often can cause a knock out. Balance is used by boxers quite simply to stay on their feet while throwing and receiving punches, for example great boxers such as Cassius Clay (Mohamed Ali) used their remarkable balance to be very effective at "dodging" punches, as their balance helped them have very quick footwork which enabled them move forward and away from their opponent very quickly. Co-ordination is vital for boxers to be able to be able to watch their opponent and pick up on mistakes to then take advantage of. To do this they cannot afford to take their eyes off the opponent; so they must be watching them closely while being able to land their punches accurately and meaningfully. This needs good hand eye co-ordination and also good hand to foot to eye co-ordination because they must be watching their opponent ready to move with their feet and torso (i.e. they must flex their vertebrae to bend back out of an oncoming punch) to avoid being punched but also using their hands and arms to be either punching or blocking. Good reaction times are vital for boxers as they must recognise their opponent's fast incoming punch and almost immediately have to move themselves to avoid being hit. ...read more.

while they're playing) Immediate - feedback you receive during your performance. Delayed - feedback you get after the match, eg, in your next training session from your coach. Knowledge of Performance - knowledge gained through feedback, eg, self analysis or a coach video analysing your performance/technique. Knowledge of Results - results given to the performer which can then be analysed to help future matches. The main types of feedback which a professional tennis player will use to aid their service will be concurrent (intrinsic - immediate), knowledge of performance and knowledge of results. Concurrent feedback will be used by the tennis player in order to try and get into a good rhythm of serving. For example when they throw the ball up they will get immediate concurrent feedback from their body telling them if it is at the right height and travelling in the correct direction. They will use knowledge of performance in order to analyse their opponent, they can go over previous times they have met to try and specialise on beating that particular person or alternatively they can analyse videos of opponents who have beat the particular player they are going to face to see how that person served in order to win and subsequently try and replicate the same style of service. Tennis players will use knowledge of performance feedback concurrently in order to see which kind of service their opponent is worst at returning. For example they might realise during the game that their opponent has a particularly weak return of service on their backhand so will continue to serve to their weak point to try and get the upper hand. This knowledge of performance will help the player use feedback as a means of error detection and then ultimately error correction. The server will be able to see which services are successful and which ones are flawed against each individual opponent; so that this information can then be used for error correction to then produce consistently effective services. 2. The effect of the information processing theory on coaching and performance. ...read more.