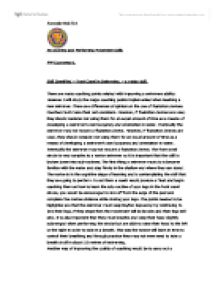 Examples of these are wallcharts, diagrams, videos, three-dimensional models etc. however, these have been found to be of limited value when teaching a skill due to their static displays. Videos are a form of visual guidance that are used increasingly by coaches both for demonstrations and feedback. However, this has only been found to be a useful method if a number of requirements are fulfilled. The learner must be verbally guided through the video to ensure that learning takes place. The learner must also be able to practise the skill immediately afterwards before their memory of the main points made in the video fades. Reference Thirdly, the performer must posses the ability to perform the skill being demonstrated. They must also be motivated enough to practise the action. Another visual guidance method is display changes. This includes changing the equipment used so that it can be seen more clearly. Although visual guidance is important, a great deal of teaching and coaching is done using verbal guidance. ...read more.

After more lessons the novice would most probably be performing the whole movement, however would still be limited to the shallow end. It would be a number of lessons perhaps even months until the swimmer masters the basic front crawl stroke depending on their ability to perform the skill. The next step would be the coaches responsibility to comment on points such as streamline body positioning, pointed toes, straight rigid arms and fingers together in order to imporve the novices way of performing the stroke. Within a year the stroke would be mastered and the novice would now be in the associative stage of learning. At this time the swimmer would probably be experienced in multi limb co-ordination and have an adequate stamina ability to perform more skills such as breast stroke and backstroke. With continuous coaching and constructive criticism and mental rehersal the swimmer may progress to the atuonomous stage of learning where he/she may execute the skill with the minimum of conscious thought. Diagram 2 shows the swimmer in the associative stage and the pictures below of Ian Thorpe are prime examples of a swimmer in the autonomous stage of learning. Alexander Bird 12A ...read more.