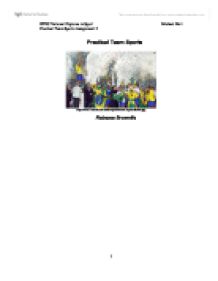 Skills, Techniques and Tactics for 5 a side Football and Basketball.

Practical Team Sports http://www.v-brazil.com/culture/sports/world-cup/brazil2002.jpg Rebecca Brownlie Task 1 5-A-side Football Skills and Techniques Dribbling- When dribbling in football you need to have good balance because if you don't when you are running with the ball you might fall. Also you need to keep the ball close to your feet so that the defending player doesn't take the ball from you. You should try and use both feet to keep control of the ball. A good dribbler of the ball is Aaron Lennon. Shooting- When shooting you will also need good balance for this because when if you don't have good balance when shooting then you might be leaning back which will mean that your shoot will go over the bar. When shooting you should plant your non shooting foot to the side of the ball and kick the ball with the other foot. You should follow through with your shooting foot so the ball travels faster. A player well known for his powerful shooting is Robin Van Persie. Passing (short pass) - When making a short pass you should use the instep of either foot. You should focus more on accuracy than power. When making a short pass you should place your non passing foot to the side of the ball and pass with your other foot. All professional football players are good passers of the ball this is because it is on of the easiest techniques to perform. ...read more.

A team that uses the diamond formation is Tottenham. Tottenham have Palacios as a holding midfielder and Luka Modric in an attacking midfield role. Square- In this formation you have equal strength in attack and in defense. This is because you have two in a defense and two in attack. This means that if you lose the ball then you have people ready to try and win the ball back off the opponents. Counterattack- When performing the counterattack tactic you should sit back and let the opposition attack you. When you win the ball you should play a long over the top of the opposition, this is so you attack before your opponents have chance to get back and defend. A team that was very successful at counter attacking was the Arsenal team that won the premiership back in 2005. Basketball Skills and techniques Passing- (chest pass) When passing in basketball you need to place both hands on the ball. They then throw the ball towards the other player with his hands pointing outwards. The power of the pass is generated from the elbows and the shoulders. This is when your elbows extend on release of the ball. All professional Basketball players are good at passing. Passing- (bounce pass) When performing a bounce pass you should pass the ball to another player in which it only bounces once between you and the other player. ...read more.

Tactics Positioning- In basketball it is key that you are in the correct position because if you aren't then the opposition might have a player in the position you should be in and therefore they will have a very good chance of getting a basket. The give and go- This is when you pass to a teammate and after you have done this then you would run straight to the basket expecting the ball back from your teammate. This will set up a number of scoring opportunities. Balance the court- this is a vital tactic in basketball, it is to make sure that you and your teammates do not overcrowd one part of the court, this is so you have options all over the court when you win back the possession. If you are all crowded in one part of the court then you will not be able to get out of that area very easily and you could even lose the ball. L-Cut- The purpose of an L-Cut is to go towards the basket after passing the ball to a teammate on the perimeter (this is the 1st line of the "L"). If you do not receive the ball back from your teammate, then you would simply make a 90� degree turn and cut off to the far outside wing area in an L-Cut formation (this is the 2nd line of the "L"). BTEC National Diploma in Sport Michael Hart Practical Team Sports Assignment 2 6 ...read more.