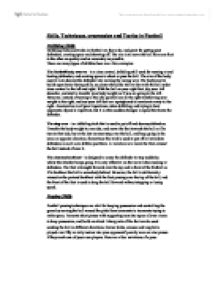 Skills, Techniques, progression and Tactics in Football Dribbling Skills Dribbling flicks and tricks in football are fun to do, and great for getting past defenders, creating space and showing off. The aim is to move the ball from one foot to the other as quickly and as accurately as possible. There are many types of dribbles here are a few examples: The football body swerve - is a close control, dribbling skill used for running at and beating defenders, and creating space to shoot or pass the ball. The aim of the body swerve is to dummy the defender into moving the wrong way. The body swerve builds upon basic turning skills, so player should be able to turn with the ball under close control to the left and right. With the ball on your right foot, dip your left shoulder, and start to transfer your body weight as if you are going to the left. However, instead of turning to the left, quickly lean to the right transferring your weight to the right, and use your left foot as a springboard to accelerate away to the right. Acceleration is of great importance when dribbling, and trying to beat opponents. Speed is important, but it is often sudden changes in speed that beats the defender. The step over - is a dribbling trick that is used to put off and dummy defenders. ...read more.

In all chest control skills, the best technique is to present the whole of the chest to the ball, rather than attempting to take the ball sideways on. The ball can be deflected to the side by turning the upper body on contact. When passing the ball, the chest is kept rigid, but to stop the ball, the upper body should be relaxed, and the legs are used to drop the chest on impact like dropping a platform. When the ball is bouncing upwards from the ground, the best method is to get over the ball, and deflect it into the ground. If the ball is arriving on the full, point the chest upwards at an angle to the ball. Deflecting the ball behind, and ducking underneath the ball as it passes achieve the 180-degree turn. Tackling Methods In football one of your main aims is to win the ball, which you can do through tackling. If you cannot tackle you are left relying on intercepting passes when your opponents make a mistake. Tackling allows you to compete for the ball, and take the initiative. It's not just defenders, who need to be able to tackle. Even forwards should be able to make a sliding tackle. The football team that can tackle well can take much of the initiative away from the opposition, denying them space, and putting them under pressure. ...read more.

Below are two football drills/practices and underneath them Adaptations and variations on the tasks which are ways of progressing: Task 1: Four attackers versus two defenders (progress to 4 v 3). Attackers start with the ball from a safe exclusion zone near their own goal. They attempt to score in one of three goals. Defenders can score in one large goal, shooting from outside the exclusion zone. After each goal the attackers restart from the exclusion zone. Task 2: Three attackers versus three defenders (progress to four defenders). Attackers start with the ball in their own third of the pitch and try to score in the defenders' goal. The defenders attempt to 'gain' possession and score in one of two goals, wide on the wings of the pitch. How To Progress: * Ensure the investigation is in different invasion games, e.g. water polo, hockey, netball, and football. * Play on differently sized pitches or courts, e.g. short and wide, long and thin, across a diamond (corner to corner). * Play with more than one goal at each end. * Play with goals on the field of play and score from any direction. * Play with adjusted equipment. * Play the game so that the ball must pass through a number of zones, before attempting to score. * Change the size and nature of the goals. * Score from either inside or outside a zone in front of a target. * Add rules like, one touch per player ...read more.