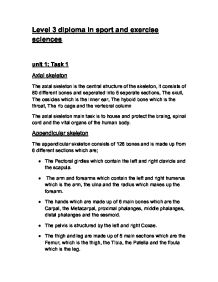 Sport and exercise sciences; Skeletal system and joints of the human body.

Level 3 diploma in sport and exercise sciences unit 1; Task 1 Axial skeleton The axial skeleton is the central structure of the skeleton, it consists of 80 different bones and seperated into 5 seperate sections, The skull, The ossicles which is the inner ear, The hyboid bone which is the throat, The rib cage and the vertebral column The axial skeleton main task is to house and protect the braing, spinal cord and the vital organs of the human body. Appendicular skeleton The appendicular skeleton consists of 126 bones and is made up from 6 different sections which are; * The Pectoral girdles which contain the left and right clavicle and the scapula. * The arm and forearms which contain the left and right humerus which is the arm, the ulna and the radius which makes up the forearm. * The hands which are made up of 6 main bones which are the Carpal, the Metacarpal, proximal phalanges, middle phalanges, distal phalanges and the sesmoid. * The pelvis is structured by the left and right Coxae. ...read more.

joint within the human body, they are movable and all have surrounding capsules, some examples of synovial joints are; * Hinges which are located in the elbows and the knees which is only movable in one direction, an example of a hinge joint is within th eknee and elbow, they also have ligaments by the side of them * A Pivot joint, which is a rotation of a bone which are located at the top of the neck, the pivot joint moves by the bones rotating around an axis, * A ball and socket joint are internal and external rotational joints which are found within the hip and the shoulder, this joint has freedom of movement within all directions * Gliding joints allow for gliding movements between bones which let them slide over each other, only a limited amount of movement is allowed between the bones. * Compound joints are made up of a number of different bones, ther articulate with one another in different ways, it is the movement of the skull on the vertebral column which allows the nodding movement and the rotation of the skull on an axis ...read more.