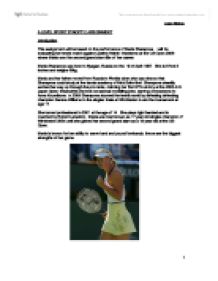 A LEVEL SPORT SYNOPTIC ASSIGNMENT Introduction This assignment will be based on the performance of Maria Sharapova. I will be evaluating her tennis match against Justine Heinin-Hardenne at the US Open 2006 where Maria won the second grand slam title of her career. Maria Sharapova was born in Nyagan, Russia on the 19 of April 1987. She is 6 foot 2 inches and weighs 68kg. Maria and her father moved from Russia to Florida when she was nine so that Sharapova could study at the tennis academy of Nick Bollettieri. Sharapova steadily worked her way up through the pro ranks, claiming her first WTA victory at the 2003 AIG Japan Open. Meanwhile she took occasional modelling jobs, earning comparisons to Anna Kournikova. In 2004 Sharapova stunned the tennis world by defeating defending champion Serena Williams in the singles finals at Wimbledon to win the tournament at age 17. She turned professional in 2001 at the age of 14. She plays right handed and is coached by Robert Lansdorp. Maria was best known as 17 year old singles champion of Wimbledon 2004 until she gained her second grand slam as a 19 year old at the US Open. Maria is known for her ability to serve hard and pound forehands, these are the biggest strengths of her game. Levers Module 1 Maria Sharapova is very tall at 6 foot 2" and so therefore has very long levers. Tennis is becoming the exclusive area of tall people. This is simply down to dynamics. Tall people possess long levers and so more power can be generated, and a greater reach achieved from a long pull or swing of the arm than a short one. Sharapova's long levers also allow her to move around the court faster enabling her to return the ball with power and even reach the most awkward of shots. Levers are mechanical devices which produce turning motions around a fixed point. ...read more.

The PE syllabuses in schools use varied classes of mixed or single sex sessions to break down stereotypes. The positive media coverage and increase in female role models has also aided the breaking down of stereotypes gaining social acceptance allowing women to have equal funding and opportunities such as coaching and employment. Women can participate in sport in groups using it as a social activity. Sport encourages women as they can gain a more healthy and toned body improving their over all fitness, playing sport can be graceful and give you that 'celebrity' sought after body of which Sharapova's body is a great example rather than the broad manly figure that prevented female participation and caused discrimination in the past. Historically in tennis, females have been paid less than men for their matches. They play fewer sets as they are seen to be weaker than men. However very recently Wimbledon have reviewed the pay and have now changed the rules so that females get paid the same as males. This has caused some outrage as females play less sets than males, therefore are often playing for a much shorter period of time yet getting paid the same as the males who play more sets and whose games can go on for hours. Tennis has a high level of equality in participation. Males and females can train together and even compete together in mixed matches as Sharapova has previously. This prevents gender from limiting participation. Sports such as football do not allow men and women to train together and so gender becomes an issue. Muscle Fibres- Module 4 There are two main types of muscles fibres which are slow twitch and fast twitch. You are born with a certain amount of each of these fibres and can never increase this amount. However you can develop and improve their efficiency. Human muscles contain a mixture of both slow and fast fibres. ...read more.

The anaerobic training that she has done will increase her ATP-PC stores in muscle cells. Her ability to provide oxygen will rapidly increase because of the increase in capillarisation. It also improves her cardio-respiratory system providing more oxygenated blood more rapidly. The adaptations increase the possible onset of blood lactate and decrease recovery time enabling us to see how Sharapova can produce such a large amount of anaerobic energy enabling her to continually return balls with such powerful forehands. Sharapova is able to delay her ATP-PC lactic acid threshold (the point at which the ATP-PC system is exhausted and the lactic acid takes over). She can also delay the onset of the aerobic threshold which is the point at which the lactic acid system is exhausted and the aerobic system takes over. The aerobic energy system utilises proteins, fats and carbohydrate (glycogen) for resynthesising ATP. In Sharapova's match against Justine Heinin-Hardenne at the US Open 2006 Sharapova really fought in the rallies that occurred and played to her best ability aerobically as this system took over eventually but Sharapova proved her aerobic system was very well developed. In two 45-minute sets, Maria Sharapova defeated Justine Henin-Hardenne, 6-4, 6-4, for her first U.S. Open. She finished with 5 aces, 4 double-faults, 20 winners and 24 unforced errors, Maria was 8 of 10 at the net. Maria hit a famous service down the line to make the game score 15-15, she then hit a big serve followed by the forehand winner to reach 30-15, and the final score came from Justein being forced to net a shot giving Sharapova 2 championship points and again Justein was forced to net a forehand. Game, set, match and title! The graph shows energy over time when exercising at 100% effort. The (T) thresholds indicate the point at which the energy system is exhausted, however training can improve thresholds and this is how Sharapova will have built up tolerance to lactic acid and have longer thresholds. ?? ?? ?? ?? Laura Bishop 1 ...read more.