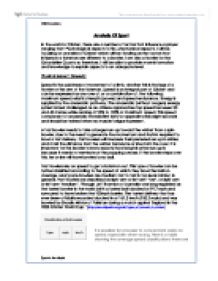 Analysis Of Sport In the world of Cricket, there are a number of factors that influence a player ranging from Psychological aspects to Bio-Mechanical aspects. I will be focusing on one side of Cricket which will be Bowling as the factors that influence a Batsman are different to a bowler. I am also a Bowler for the Oxfordshire County so therefore, I will be able to provide more information and knowledge to explain aspects to an adequate level. Physical Aspect (Speed): Speed is the quickness of movement of a limb, whether this is the legs of a Bowler or the arm of the Batsman. Speed is an integral part of Cricket and can be expressed as any one of, or a combination of, the following: maximum speed, elastic strength (power) and speed endurance. Energy is supplied by the anaerobic pathway. The anaerobic (without oxygen) energy system is best challenged as an athlete approaches top speed between 30 and 60 metres while running at 95% to 100% of maximum speed. This speed component of anaerobic metabolism lasts for approximately eight seconds and should be trained when no muscle fatigue is present. A fast bowler needs to take a longer run-up toward the wicket than a spin bowler, due to the need to generate the momentum and rhythm required to bowl a fast delivery. Fast bowlers will measure their preferred run up in strides and mark the distance from the wicket before he or she starts the over. ...read more.

Psychological Aspect (Visualization): An excellent cricket tip I picked up is the power of visualization. It is a skill which is often ignored by cricketers. For batsmen, bowlers and fielders at any level of the game it is an important skill that should be mastered. Visualization is a very powerful technique that can help increase both your efficiency and effectiveness in achieving your cricket goals, whether it would be scoring one hundred runs, playing a perfect cover drive or taking that important wicket or catch. "You must see your goals clearly and specifically before you can set out for them. Hold them in your mind until they become second nature." Ricky Ponting. (A book called Visualization: The Key To Success? By Ian Canaway.) I believe this was the phrase that allowed me to set myself a positive and competitive attitude towards Cricket. When you begin to use the visualization techniques, you want to mentally create a vivid scene in your mind of what you want to achieve. You want this scene to be as detailed and clear as possible, you need to be able to see and feel your success. An example of this would be picturing yourself taking that critical wicket or scoring that winning run. Being able to visualize your success allows other mental advantages to come in such as a build-up of confidence and self esteem. Confidence will allow the bowler to be more consistent and be able to vary up his or her bowling styles and tactics as they will believe that they can do these types of bowls and therefore, make more of an impact on the result of the game. ...read more.

This resistance could be anything from Free weights to medicine balls, resistance bands, kettlebells or a partner during a training exercise. Cricketers get the best benefits from strength training about 2-4 times a week. Total training time can vary a little more but 1-3 hours split between those sessions are recommended by 'UK Sport'. The fitter you are the more you can do. 'The best strength training is the type that gives greatest crossover to the pitch in both performance (speed, power) and injury prevention. This is generally referred to as functional training. While this is an area of great debate in the strength coach world, there are some generally agreed areas. * Multi Joint. Exercises that involve the whole body have a greater crossover (more functional) because they more closely emulate what you do on the pitch. They are also more time efficient as you are training several muscles at once. Variations of squats, deadlifts, bench pressing and rowing are all examples. * Explosive movements. Cricket requires you to move fast so generally your training should be fast. That may mean less weight moved more explosively but it will give you a better result on the pitch.' (http://wiki.answers.com) I chose strength as one of my five components as it allows the bowler (especially a pace bowler) to have more variety of bowls to select from during an over, as strength creates speed, and speed creates variety such as swing, bouncers etc. It also allows less time for the batsman to choose a shot to play and therefore may end up getting himself or herself out. ?? ?? ?? ?? Will Hawkins Sports Analysis ...read more.