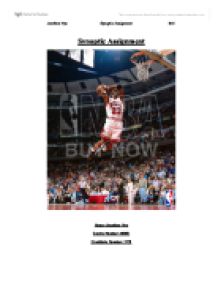 Synoptic Assignment Name: Jonathan Nye Centre Number: 58281 Candidate Number: 1178 Introduction Name: Jonathan Fly Age: 17 Ability: Elite Sport: Basketball Weight: 14st Height: 6ft 4" Nationality: British/Afro-Caribbean Jonathan Fly has been playing basketball since year 9, aged 14. He has 1 sister, 1 brother, and lives on his own in Ocean Village. His mother lives in Shirley, and father has a house in Curdridge, Botley. Jonathan claims to have never been into sport until he decided to attend a team tryout for the U14 Southampton Basketball Team, with the intention of "just getting healthier". He found a natural flare and love for the game instantly and soon found himself in the U14 Hampshire side as a starting Centre. Jonathan received honours for "Most Improved Player" at the end of the 2004/05 season. He was then selected for a starting 5 spot for both Southampton and Hampshire in the U15's National Leagues', and attended tryouts for the South England U16's the same year. Since then he has been improving his game and has received further trophies for "Coaches Player" and "Best Defensive Player" whilst playing for the National Leagues Trailblazers team, and captaining his College side. He has also been to training camps and represented England in tournaments in the USA twice, and Italy. Jonathan trains 4 days a week, with, on average, 2 competitive basketball games per week also. On Mondays, Jonathan trains with his Southampton Trailblazers side for 2 hours. On Tuesdays he trains with his College side for 2 hours after lessons. Wednesdays are his day off. On Thursdays Jonathan normally has a College game after lessons, and on Friday nights he trains for Southampton Academy with the older and younger sides, and the men's and women's sides. On Saturdays or Sundays Jonathan plays National games across the country with the Southampton Trailblazers. Weaknesses 1. Poor approach when dunking. 2. ...read more.

Racial stereotypes in sport through the use of stacking and centrality have a massive effect. Black performers are regularly being covertly and sometimes overtly pushed into certain roles in sport, and notably these are non-decision making roles with a great importance. As a result, performers are not being allowed to develop and explore sports they wish and find potential talents that they may have. There have been several attempts to overcome racial discrimination within sport. And to an extent the Race Relations Act has helped but racism still exists. The "let's stamp racism out of football" campaign in 2003 used role models and international superstars to help try and cut out racial harassment in football. By using role models, this showed to everyone, especially younger people that racism is not acceptable. This topic will help to increase performance and will make the performer feel much more confident when dribbling the ball, therefore putting more pressure on the opponent. 3. Muscle Fibres-Module 4 Striated muscle is made up of many cells of a similar type, all working together to perform a particular function. So, muscle is a type of tissue. Skeletal muscle in the body is made up of many muscle fibres. These muscle fibres are made up of individual myofibrils. The myofibrils are made up of both thick and thin filaments called Myosin and Actin. There are two different types of muscle fibre. These are fast twitch and slow twitch. During aerobic exercise, it is mostly the slow twitch muscle fibres that are working. They produce ATP through aerobic respiration, contain large numbers of mitochondria, contain large quantities of myoglobin, have a relatively small diameter and are supplied by large numbers of capillaries. Fast twitch muscle fibres, however, are used during intensive short term exercise such as sprinting. They produce ATP through anaerobic respiration, contain few mitochondria, contain little myoglobin, have a relatively large diameter and are supplied by relatively few capillaries. When playing basketball, both fast and slow twitch muscle fibres are used. ...read more.

Vicarious Experiences- This is when the performer watches someone of similar standard and ability to themselves who is achieving success is known as vicarious experiences. It helps them, to see what other people, similar to them are doing wrong in their performance and allows the performer to potentially apply this to themselves. In addition, vicarious experiences can develop a performers evaluative skills and their positive attribution of performance. This helps the performer as it can give them the self belief that they can achieve if the person of a similar standard can as well. Consequently, this increases self-efficacy. To increase the performer's self-efficacy they need to watch someone of similar ability who is often falling behind in a match but manage to recover to win the match. Verbal Persuasion- When a coach or peer talks to the performer giving them encouragement and motivational help so that they believe they can do the task that they are given. Depending on the level of persuasion and the significance of the motivator, verbal persuasion can be very influential on a performer. By verbally encouraging the performer, self-efficacy could increase dramatically if the verbal encouragement is from a significant other or a role model. Emotional/Physiological Arousal- This is the way in which the performer interprets and understands the arousal levels that they experience. Interpreting arousal, such as increase heart rate or sweating, or simply thinking negatively would decrease self-efficacy. In contrast, by adapting this arousal positively through positive psychological preparation will increase self-efficacy as the performer has a better arousal perception prior to performance. By understanding this topic, Jonathan would win 60% of the games that he currently loses. Also, his free throw consistency would improve to 75%, as a result of a rise in self-efficacy. Conclusion This assignment has observed the performer and as a result forming six weaknesses of their performance then discussing six topics relevant to those weaknesses from the Sport and PE syllabus and explaining how knowing about those topics would help the performer to improve to the next stage of performance. ?? ?? ?? ?? Jonathan Nye Synoptic Assignment R44 ...read more.