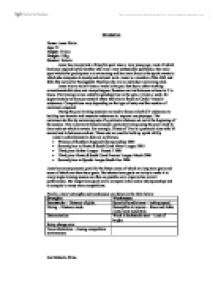 Introduction Name: Jenna Waite Age: 15 Height: 155cm Weight: 52Kg Gender: Female Jenna has always had a liking for sport since a very young age, most of which has been inspired by her brother who was a very enthusiastic sportsman. Her main sport which she participates in is swimming and her main focus is the sprint events to which she competes at county and national level. Jenna is a member of the ASA and IOS. She swims for Basingstoke Bluefins who are an individual swimming club. Jenna tries to train 6 times a week in the pool but due to other working commitments this does not always happen. Sessions can last between an hour to 2 1/2 hours. The training is also aided by spending time in the gym, 4 times a week, for approximately an hour per session where she tries to focus on Cardio Vascular endurance. Competitions vary depending on the type of entry and the number of swimmers required. During the pool training sessions we tend to focus on both CV endurance to build up our stamina and muscular endurance to improve our physique. The swimmers do this by swimming sets of a particular distance set out at the beginning of the session. This is normally based around a particular timing using the pace clock to time each set which is swum. For example, 10 sets of 75m in a particular time with 10 second rest in between each set. These sets are used to build up sprint ability. Jenna's achievements to date are as follows; * Winners of Southern England Championships 2005 * Second place in Hants & South Coast Minor League 2005 * Third place Rother League - Round 1 2005 * Third place Hants & South Coast Premier League March 2006 * Second place in Speedo League South Dec 2006 Jenna has many personal goals for the future some of which are long term goals and some of which are short term goals. ...read more.

Intensity defines the amount of effort that should be invested in a training program or any one session. Like frequency, there must be a balance between finding enough intensity to overload the body (so it can adapt) but not so much that it causes overtraining. For Jenna's resistance training, workload is the primary measure of intensity. Workload can have three components: 1. The amount of weight lifted during an exercise 2. The number of repetitions completed for a particular exercise 3. The length of time to complete all exercises in a set or total training session Jenna can increase workload by lifting heavier weights, or could increase the number of repetitions with the same weight. Finally, she could lift the same weight for the same number of repetitions but decrease the rest time between sets. The third component in the FITT principle dictates what type or kind of exercise she should choose to achieve the appropriate training response. The best form of exercise to stress the neuromuscular system is resistance training. But resistance training does not necessarily mean lifting weights. A circuit training session that only incorporates bodyweight exercises could be used as an alternative. The final component in the FITT principle of training is time - or how long Jenna should be exercising for. The common duration of resistance training session is no longer than 45-60 minutes. Intensity has a say and particularly grueling strength sessions may last as little as 20 - 30 minutes. Energy Systems The different strokes and distances in swimming have different energy demands on the body. When performing exercise the body requires energy to function. This energy is supplied by taking in fuel in the form of food. Breaking down food releases chemical energy which is stored in the body's cells as a high energy compound called Adenosine-Triphosphate or ATP. ATP is needed to supply energy for muscular contractions. ...read more.

Emotionally, anxiety causes a sense of dread or panic and physically causes nausea, and chills. Jenna participated in a Sport Competition Anxiety Test (SCAT) and produced a particularly high score of 24 with the maximum being 30. This shows that in competition, Jenna has a fairly high state of anxiety and a low self efficiency would be present. The cognitive anxiety showed a result of perceptual narrowing which makes the performers spatial attention to shift. Instead of looking at the full picture, of each stage of her dive or backstroke start, she focuses on what she believes to be her weakness and therefore the other elements of her dive or backstroke start are weakened in ability. Peripheral cues closer to the performer generated a stronger effect when they were perceived at a different perceptual depth. The easiest option, creating a legal yet not so effective dive was chosen instead of pausing and thinking about future opportunities such as distance covered. The somatic anxieties, which could be defined as a physiological aspect, would be identified, the majority as muscle tension predominantly in the quadriceps and hamstrings. This sign of anxiety was obvious through slow movement of the legs during warm up practices. The increased number of stretches also was a clear sign of muscle tension. Jenna tended to clutch their legs so to relive tension. Once the warm up had concluded, the mobility seemed to be increased. The tension was identifiable due to Jenna's facial expressions when on the starting blocks. They appeared to not be relaxed in the game and therefore affecting their performance. Previous injury may result as a somatic anxiety symptom. The performer was clearly favouring the left leg and it was obvious they weren't putting in full effort with particular movements. This injury is psychological not just physical as she was thinking about how the injury could effect the time of her swim and how it could cause a level of discomfort. This discourages Jenna into not putting full effort into the competition. This could be a subconscious choice which could cause worry throughout the race. Zo� Michelle Wiles ...read more.