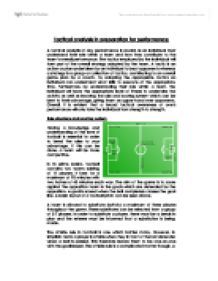 Tactical analysis in preparation for performance A tactical analysis of any performance is crucial as an individual must understand their role within a team and how they contribute to the team's overall performance. The tactics employed by the individual will form part of the overall strategy adopted by the team. A tactic is an action or plan undertaken by an individual to beat opponents whereas a strategy is a group or collection of tactics, contributing to an overall game plan by a coach. By adopting the appropriate tactics an individual can understand what skills to execute at the appropriate time. Furthermore, by understanding their role within a team, the individual will have the appropriate level of fitness to undertake the activity as well as knowing the rule and scoring system which can be bent to their advantage, giving them an upper hand over opponents. Overall, it is evident that a broad tactical awareness of one's performance will only take the individual from strength to strength. Rule structure and scoring system Having a knowledge and understanding of the laws of football is essential in order to bend the rules to your advantage. If this can be done, a team will be more competitive. In its prime basics, football contains two teams existing of 11 players. ...read more.

A coach or manager may adopt a different strategy for certain games as some teams may pose a greater threat whilst others will be less threatening. At School, we play a formation of 4-5-1 (example can be seen to the right). This formation works on the basis of having two right and left wingers supporting the lone centre forward. It is more of an attack minded approach, having in effect three attackers whilst still having a holding central midfield player to patrol in front of the defensive back four. At school, we regard this formation as being very effective as the wingers utilise the wide space well and support our centre forward efficiently. Furthermore, with the strength and defensive ability of the holding central midfielder and a capable defensive four, the foundation of our team is very strong. My role within this formation is a right full-back. As I am a defender there is no need for me to attack on a mass scale though I may need to support the right winger at certain points of the game. As a defender, my predominant role is to defend by clearing the ball away from danger or passing the ball out of defence when necessary. I may also need to attack our own corners when necessary in order to add a heightened presence within the oppositional penalty area. ...read more.

From my perspective, this is very important as I am likely to be under significant time pressures. When this happens, I may attempt to clear the ball up the middle of the pitch but when I do not have the chance to pick a ball out, I may just clear the ball away for a throw in or a corner. Clearing the ball does not necessarily build an attack but it certainly prevents the chance of the opposition scoring. This skill is consequently more appropriate to my role as a defender as a pose to other members of a team. Physical conditioning From a physical perspective, it is crucial that I am in peak physical condition in order to cope with the demands of a game. As a defender, being physical is ever more crucial, considering I must win headers and tackles in order to gain possession for my team. In comparison to other members within my team, I must be taller and more physical in order to win the ball. This is especially important when defending set pieces as I must compete for the ball against oppositional players in order to prevent them from scoring. In order to become more physically able to cope with the demands of the game I have been undertaking weights resistance training in order to develop my muscular strength. This should therefore enable me to be more competitive when attempting to win tackles and when trying to win headers. ...read more.