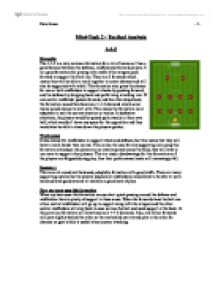 Mini-Task 2 - Tactical Analysis 4-4-2 Strengths The 4-4-2 is a very common formation for a lot of teams as it has a good balance between the defence, midfield and forward players. It is a good formation for playing with width if the wingers push forward to support the front line. There are 2 forwards which means they will be able to work together to create chances and will also be supported with width. This formation also gives the chance for one or both midfielders to support attacks by pushing forward, and the defence by dropping back and performing a holding role. If one central midfielder pushes forward, and the other drops back, the formation would then become a 4-4-2 diamond which some teams would choose to start with. This makes the formation more adaptable to suit the current situation or tactics. In defensive situations, the players would be spread quite evenly in there own half, which wouldn't leave any space for the opposition and they would also be able to close down the players quicker. Weaknesses Gives chance for midfielders to support attack and defence, but this means that they will have to work harder than normal. This is also the case for any supporting role using this formation as because the players are so evenly spread across the field, they will have to run more to support other players. This is a major disadvantage for this formation as if the players are fatigued during play, then their performance levels will increasingly fall. ...read more.

Alexandre Song is the first pick for Arsenal to play in the centre. He has established himself well playing in front of the back 4 in a defensive midfield position. Unlike my role in this formation, Song makes attacking runs to support the forwards and sometimes gets on the score sheet. I could improve my game by watching how and when he makes these runs and practice them myself. This way I will gain a better understanding of when the right time to make a run would be. 5-3-2 Strengths This formation contains 3 central defenders, 2 wide defenders, 3 central midfielders and 2 centre forwards. This is a strong defensive formation as there are numbers in defence. This makes it difficult for the opposition to create chances and allows the midfield to push forward to support the forwards more, knowing that there is plenty of defence backing them up. This also allows the 2 wide defenders to become attacking full back and support the forwards by giving the team attacking width. If the full backs can keep up with the tempo of play then their team will have a strong defence and attack. Weaknesses As the full backs are providing support for both defence and attack, if they cannot keep up with the tempo of play, they may get fatigued which would affect their performance negatively. Also the team has to put a lot of faith into these two players to support them, and if they fail to, the formation won't be as effective as it could be. ...read more.

Summary This 4-2-4 formation provides a high level of attacking support but puts a lot of pressure on the midfield. If used in a match there would be a lot of chances for both teams and would be played to a very high tempo. How my team uses this formation When we use this formation, we find that playing long balls are a lot more effective than playing the ball through the midfield. Any player not in an attacking position doesn't go up to support attacking moves in case we lose the ball. We play to a very high tempo as we need to work hard to make sure we get the ball back and when we do, we usually have to play a long ball to the forward players. My role in formation My role in this formation is to stay defensive. When the opposition have the ball they are already past the forwards and will move towards my position. It's my role to put pressure under the ball carriers and try to win the ball back. If I win or receive the ball I will make long passes to the forwards and they will support themselves in attacking moves. How it could be improved for our team/how I could improve I think that this formation could be improved by making 1 or 2 of the forwards drop back to support the midfielders to relieve a bit of pressure off them. When playing in this formation I have to make a lot of tackles. If I worked on my tackling in training then I would give away less fouls and win the ball more during match play. ...read more.