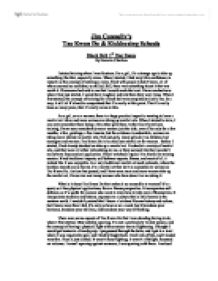 Jim Connolly's Tae Kwon Do & Kickboxing Schools Black Belt 1st Dan Essay By Danielle Charlton I started training when I was fourteen. For a girl, it's a strange age to take up something like that, especially alone. When I started, I had very little confidence in myself, so the concept of entering a room, filled with people I didn't know, all of whom seemed so confident, so skilled. Still, there was something about it that was worth it. If someone had said to me that I would reach the level I have reached now when I had just started, I would have laughed, and told them they were lying. When I first started, the concept of training for a black belt was completely alien to me. In a way, it still is! It's hard to comprehend that I'm really at this point. That it's really been so many years, that it's really come to this. ...read more.

It's a sport; so it has physical applications, from a fitness perspective. It incorporates self-defence; so it's useful for women who want to learn how to take care of themselves. It incorporates tradition and history, exposure to a culture that is little known in the western world. I wouldn't pretend that I know a lot about Korean history and culture, but I know more than I did. It's only an hour or so a week, but it broadens your horizons, broadens your abilities, and broadens your way of thinking. There were some aspects of Tae Kwon Do that I was dreading having to do, when I first started. Most notably, sparring. I'm not a particularly violent person, and the concept of having a physical fight with someone was so frightening. I thought I would get beaten to a bloody pulp. I progressed through the belts, and I got to a level where I was required to spar, and I hardly fought back. ...read more.

Two sets of major exams, plus the production of a portfolio for my application to university combined with an intensive year long course. Here I am now, at university, miles from my home and enjoying all the regular clich�s of university life, but I don't want to lose the commitment I have made to Tae Kwon Do. I've trained too hard, too long, to quit at the last hurdle, just because I've moved away. So I intend to continue. I'll find a new club. I'll keep training. I'll do my Dan grading again, if I have to. But hopefully I won't. Hopefully I will be able to pass. Perhaps then I can progress even more; perhaps I reach new levels that I can't imagine. How far will I go in tae kwon do? How far will this martial art take me as a person, in life? I believe it will take me as far as I want to be taken. I can progress as far as I want to progress. I can get as much out of tae kwon do as I put into it. ...read more.