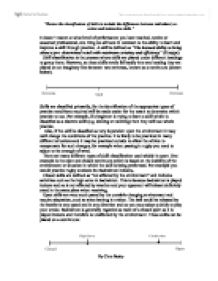 The ability to learn and improve a skill through practice.

It doesn't matter at what level of performance you have reached, novice or seasoned professional, one thing we all have in common is the ability to learn and improve a skill through practice. A skill is defined as "The learned ability to bring about a pre- determined result with maximum certainty and efficiency" (Knappe). Skill classification is the process where skills are placed under different headings to group them. However, as these skills rarely fall easily into one heading they are placed on an imaginary line between two extremes, known as a continuum (shown below). Skills are classified primarily, for the identification of the appropriate types of practice conditions required will be made easier for the coach to determine which practice to use. For example, if a beginner is trying to learn a skill which is classified as a discrete skill (e.g. kicking or catching) then they will use whole practice. Also, if the skill is classified as very dependent upon the environment it may well change the conditions of the practice. It is likely to be practiced in many different situations and it may be practiced outside to allow the athlete to compensate for such changes, for example when passing in rugby you need to adjust to the strength of wind. ...read more.

while during the delivery of the ball you use very small and precise muscle movements (fine). Another type of skill classification is the discrete, serial and continuous continuum. This is concerned with how well defined the beginning and end of the skill are. Discrete skills are brief, well- defined actions which have a clear beginning and end. They are single, specific skills which make up the actions involved in a variety of sports, such as hitting and throwing. Serial skills are a group of skills strung together to make a new and complex one, such as the sequence in a triple jump. Finally, continuous skills have no obvious beginning and end. The end of one cycle of movements is the beginning of another, like running or cycling. Generally, in both cricket and badminton skills are serial. For example when bowling you put together a group of discrete skills to perform your action. One exception could be the skill of running between the wickets which involves a continuous skill or when throwing the ball to the wicket- keeper, which would be defined as a discrete skill. ...read more.

It is extremely hard to define skills as either coactive, interactive or individual. This is because within one skill the classification can alter depending on the circumstances which they are carried out in, for example bowling. When practicing bowling against an empty set of stumps in nets, it is very much an individual skill. However, when a batsman enters this scenario it becomes a coactive skill, because the performance of the batsman will affect your performance, for example if you bowl a short ball and are hit for a boundary then you are unlikely to bowl short at that batsman again. In a match situation bowling can be defined as an interactive skill, this is because you are interacting with your teammates when you set your field. In conclusion, I believe that skill classification is extremely useful in allowing us to plan practices and training programmes. I have also concluded that it is almost impossible to classify a sport and is in- fact more beneficial to take various skills within these sports and classify them using continuums. I have also noticed that within one sport there can be certain skills which lie at opposite ends o the continuum, for example when you are batting in cricket, the situation is very much externally paced while when bowling you control the pace. ...read more.