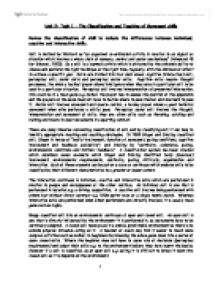 The Classification and Teaching of Movement skills. Review the classification of skill to include the differences between individual, coactive and interactive skills.

Unit 2: Task 1 - The Classification and Teaching of Movement skills Review the classification of skill to include the differences between individual, coactive and interactive skills. Skill is defined by Welford as "an organised co-ordinated activity in relation to an object or situation which involves a whole chain of sensory, central and motor mechanisms" (Advanced PE for Edexcel, 2000). So a skill is a learned activity which is affected by the athlete's ability to choose and perform the right technique at the right time, regularly, with the minimum of effort to achieve a specific goal. Skills are divided into four main areas; cognitive (intellectual) skill, perceptual skill, motor skills and perceptual motor skills. Cognitive skills require thought processes, like when a football player shows intelligence when they select a particular skill to be used in a particular situation. Perceptual skill involves interpretation of presented information, this could be in a team game e.g. netball the player has to assess the position of the opponents and the players on the same team will have to decide where to pass the ball and how hard to pass it. Motor skill involves movement and muscle control, a hockey player shows a good technical movement when s/he performs a skilful pass. Perceptual motor skill involves the thought, interpretation and movement of skills; they are often skills such as throwing, catching and running and relate to most movements in a sporting context. ...read more.

An example is sprinting, just because it is simple skill it does not mean that it is easy to run 100m in 10 seconds. In 1963 Knapp defined skill as "the learned ability to bring about pre-determined results with maximum certainty; often with the minimum outlay of time or energy or both". It is difficult to classify skills as they are so varied. However by using a continuum or scale for the different elements of skills a system of classification has been established. This enables all aspects of the skill to be included somewhere on the scale. The example below shows how a sport uses different degree of each of the continuum of skill. Triple Jump Individual Coactive Interactive 1 2 3 4 5 6 7 8 9 10 Open Closed Self-paced Externally paced Discrete Continuous Fine Gross Simple Complex Low organised Highly organised This example also shows that all the continuum apart for individual, coactive and interactive have a scale of fitting into the continuum. With individual, coactive and interactive the sport is one of the three and does not fit in-between. So when deciding how a sport or a skill in a sport fits a continuum all of them should be looked at. Classification of skill is defined as "the process of grouping similar skills together and giving them a generic label." (physical education and the study of sport, 2000). This helps teachers and coaches decide on the right type of teaching styles to optimise the athlete's performance. It is particularly important for elite performers as only a small difference in technique or tactics can make the difference between winning or loosing. ...read more.