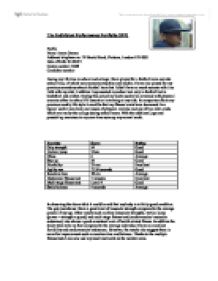 The Individual Performance Portfolio (IPP) Profile Name: Imran Osman Address/ telephone no: 78 Harold Road, Plaistow, London E13 0SG Date of birth: 02-08-97 Centre number 13409 Candidate number: During my life time in school and college I have played for a football team out side school time, of which won numerous trophies and medals. I have also played for my previous secondary schools football team but I didn't have as much success with it as I did with my club. I addition I represented my school not only in football but in basketball and cricket. During this period my week used to be crammed with physical exercise either in school PE lessons or in training at my club. In comparison from my previous weekly life style it could be that my fitness levels have decreased. In a typical week I now have one lesson of physical exercise and one of two extra clubs which are run by the college during school hours. With the additional jogs and press/sit up exercises in my own time sums up my normal week. Exercise Score Rating Grip strength 54 Good Vertical jump 52cm Good Chins 6 Average Step up 26 Good Flexibility 23 cm Excellent Agility run 17.24 seconds Good Reaction time 18 cm Average Abdominal fitness test 5 minutes ...read more.

some days nothing is eaten and others there are a clear difference in intake of food. The lack of fruit and vegetables suggest that I'm consuming a low amount of nutrient and vitamins which could prove important in the improvement/development of my general fitness levels. However, I have a good consistent level of protein intake coming from eggs, chicken and beef, which is consumed at a variety of different time of the day throughout the week. Protein is good for my health as it works on repairing any damaged muscles fibres/tissue. Football Match At the begging of the year I took part in a football match against 'Leyton old'. The match started at a high tempo and remained intense throughout. At the begging of the first half I was constantly on my feet closing down opposing strikers and trying to retrieve the ball. We played some good football and ended the first half with a lead. At the start progression into the second half was slow and so they capitalised and got ahead which was not expected. However, this shows the intensity of the match. We spent most of the time fighting to equalise but unfortunately we were beaten by time and so lost the game. ...read more.

fitness test Level 9 Good Static balance 4 seconds Average Exercise Score Rating Grip strength Right: 54 left:46 good Vertical jump 55cm good Chip ups 6 away 9 facing good Sit and reach 25 cm excellent Reaction time 14cm good Bleep tests Level 8(2) good Agility run 16.63 good Abdominal bleep test 7 minutes excellent From observation it is clear there is a significant change in the results. Thus, suggesting more improved and developed in general fitness levels. Although I don't feel I have improved on it as much I could have. During this year it could be said that there are multiple factors which could have had a significant effect on the development of my fitness levels. For example dietary was inconsistent and some vital vitamins and fruits missing. In addition the high intake of fat from chicken and chip didn't help it just slowed me down as I had to burn of fat instead of improving my fitness. Furthermore, I had large gaps of time wasted with no physical exercise apart from PE lesson unattended to. Thus allowing reversibility to occur, resulting in the lose of any improvements to my fitness. On a positive note I made good use of progression and overload and I feel this was the key to most of my improvement. ...read more.