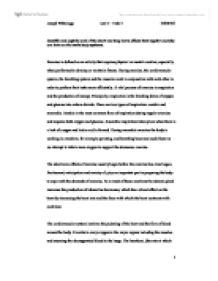 The Long and Short Term Effects of Exercise

Identify and explain each of the short and long-term effects that regular exercise can have on the main body systems. Exercise is defined as an activity that requires physical or mental exertion, especially when performed to develop or maintain fitness. During exercise, the cardiovascular system, the breathing system and the muscles work in conjunction with each other in order to perform their tasks more efficiently. A vital process of exercise is respiration and the production of energy. Principally, respiration is the breaking down of oxygen and glucose into carbon dioxide. There are two types of respiration: aerobic and anaerobic. Aerobic is the most common form of respiration during regular exercise and requires both oxygen and glucose. Anaerobic respiration takes place when there is a lack of oxygen and lactic acid is formed. During anaerobic exercise the body is working in overdrive, for example sprinting, and breathing becomes much faster as we attempt to inhale more oxygen to support the strenuous exercise. The short-term effects of exercise usually begin before the exercise has even begun. Excitement, anticipation and anxiety all play an important part in preparing the body to cope with the demands of exercise. As a result of these emotions the adrenal gland increases the production of adrenaline hormones, which has a direct effect on the heart by increasing the heart rate and the force with which the heart contracts with each beat. ...read more.

During exercise there is an increased need for oxygen thus inhalation rates during exercise are increased. The tidal volume, (namely the amount of oxygen taken in during each inspiration,) and the rate of breathing, (the number of breaths taken per minute,) increase as a result of this. The increase between these two figures can be as much as twenty times. Other short-term effects of exercise on the respiratory system can be identified as shortness of breath and rapid breathing. This occurs in order to replace the oxygen in the blood and remove the carbon dioxide, which has built up during exercise, at a more rapid rate than the body is normally used to. Over-exertion during exercise can mean that not enough oxygen is being inspired and a lack of oxygen can cause one to hyperventilate or, as a result of a lack of oxygen reaching the brain, even collapse. An increase in lung capacity and therefore tidal volume is a long-term effect of exercise on the respiratory system. A larger surface area of the lung means that the amount of oxygen consumed per minute is higher. 'The intercostals muscles and the diaphragm become larger and stronger which lets the person perform larger breathing actions.'3 This then allows more oxygen to be taken in and enables the body to dispose of waste products more quickly. ...read more.

There are very few, if any at all, short term effects on the skeletal system from exercise because a person's bones are slowly growing all the time, until roughly the age of thirty-five. However, long term effects of exercise on the bones include an improvement in the condition and strength of one's bones. Regular physical activity benefits our health and fitness wholly and helps us to avoid disease and delay death. Some examples are: risk of osteoporosis and arthritic symptoms. A high blood pressure increases the risk of heart disease, stroke and kidney disease. Regular exercise increases a person's immunity to diseases as more red and white blood cells are produced. It decreases blood pressure, helps keep joints flexible by building muscle to support the joint and delays bone loss. It also widely recognised that regular physical activity increases one's self-esteem and self-confidence. In conclusion, exercise affects the body systems in many different ways, with some effects coinciding with the effects on other systems, i.e. cardio-respiratory endurance. It is important to take into account each individual's personal health, fitness and lifestyle when considering the effects of exercise. For example a young, healthy athlete who eats a balanced diet, does not smoke and trains regularly is going to have a more effective cardiovascular and muscular and respiratory system than a sixty year old obese diabetic who has smoked forty cigarettes a day since the age of sixteen. ...read more.