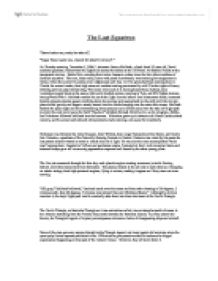 The Lost Squatron "Bravo leader one, ready for take off,' "Roger Bravo leader one, cleared for takeoff, runway 5." On Tuesday morning, December 5, 2006, Lieutenant Jimmy McGrath, a fresh faced 22 year old, Naval academy graduate, maneuvered his fighter jet across the tarmac at the US Naval Air Station Florida to the designated runway. Behind him, awaiting their tower clearance orders were the four other members of Jimmy's squadron. The men, boys really, some with peach fuzz beards, were training for assignment in Dubai, where they could fly sorties over Afghanistan and Iraq. All five pilots had been training here in Florida for several weeks, their high stress air combat training punctuated by wild Florida nights of heavy drinking and non-stop womanizing. The locals were used to it, having hosted these flyboys since Lauderdale nearly burst at the seams with newly drafted airmen, training in T-6s, and SNJ fighter trainers during World War 2. McGrath readied his jet at the flight line and after a final instrument check, increased throttle towards rotation speed, rumbling down the runway and easing back on the stick until the two ton plane defied gravity and began a steady ascent into the clouds hanging over the azure blue ocean. McGrath banked the plane right and felt momentary g-force pressure as he rolled away from the take off flight path to allow the next jet to leave the Earth."Hee-haw" shrieked through Jimmy's mic, as his wingman, Bobby-Joe Nicholson followed McGrath into the heavens. ...read more.

"Boys, this is Taylor, don't worry, we left the Georgia swamp area 30 miles back, and we should be coming up on the Keys shortly," "Who's on this frequency, identify yourselves, " Lt. McGrath said into his helmet mic. He scanned his instrument radar panel and again looked outside his cockpit canopy but did not see any other planes in the bright, clear, mid-day sky. Without answering McGrath, the unknown chatter continued. "Hey Brownie, if we ever find our way back, I'm gonna propose to that nurse I met last week at the USO Holiday dance." "Yeah, yeah sure, the one whose feet you kept stepping on during the Glen Miller piece?" "Shiiit, Glenn Miller, what the fuck is that all about," Fontaine said. "Hey, one of you guys playing some sort of trick on our boy Jimmy," Fernandez laughed. "Yeah, one of those old radio shows, or some shit like that," Fontaine replied. "I don't know about you but it's freaking me out," said Grayson. "Anyway, whoever it is mentioned Lauderdale, so it's probably some old Navy guys out for a joyride. I see those guys come out on Sunday's sometimes and fly around in those old radial engine trainers." "Yeah, but it ain't Sunday, and what they all doin' on our radio frequency," drawled Nicholson. "All right, all right, forget about it. ...read more.

One by one the gleaming blue fighter planes lowered their flaps, cut off their throttles and eased their tired metal frames onto the tarmac. As they rolled off the runway, they passed rows of B-17 bombers, fresh from the battle over Europe, being serviced and refit for duty in the Pacific against the Japanese. Worried ground crews raced in gray jeeps toward each plane, dropping heavy wooden blocks under the wheels, and climbing up on the wings to draw back the heavy canopies to release the human cargo. The fourteen crew members scrambled to the airfield grounds and embraced one another, removing their yellow Mae West vests and crush caps, giving thanks that what was lost was once again found. Meanwhile, miles away, five jet fighters crossed the sky into an ethereal graveyard. They hurtled at supersonic speed into an endless vortex of space and time without up or down, without time or space, without any connection to the world they left behind. At NORAD, desperate computer messages flooded the communications room alerting the men and women who worked there of a crisis in the making. An Admiral rushed into the room in time to confront a telecommunications staffer who was the most recent recipient of the tragic news. "Sir," the young ensign said to the astonished man," Flight 19 is missing." "Get me Rumsfeld," the Admiral replied. Two wars, 6 decades apart. Two tragedies, dance partners in a macabre story with ironic parallels. The past and the future, melded together, and separated, one mystery solved, another one just beginning. ...read more.