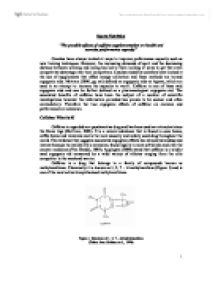 Sports Nutrition "The possible effects of caffeine supplementation on health and exercise performance capacity" Coaches have always looked at ways to improve performance capacity such as new training techniques. However, the increasing demands of sport and the decreasing distance between winning and losing has led to them looking at ways to get that extra competitive advantage over their competitors. Coaches aided by scientists have looked at the use of supplements that effect energy utilisation and these methods are termed ergogenic aids. Mottram (1996, pg xvi) defined an ergogenic aids as 'agents, which are used in an attempt to increase the capacity to work'. Caffeine is one of these said ergogenic aids and can be further defined as a pharmacological ergogenic aid. The associated benefits of caffeine have been the subject of a number of scientific investigations however the information provided has proven to be unclear and often contradictory. Therefore the true ergogenic effects of caffeine on exercise and performance are unknown. Caffeine: What is it? Caffeine is regarded as a psychoactive drug and has been used as a stimulant since the Stone Age (Mottram, 1996). It is a natural substance that is found in coca beans, coffee beans and tealeaves and is the most casually and widely used drug throughout the world. The evidence that suggests associated ergogenic effects has stimulated widespread interest because its availability is extensive, found legally in most soft drinks and over the counter medicines (Van Handel, 1983). Applegate (1999) stated that caffeine is a widely used ergogenic aid consumed by a wide variety of athletes ranging from the elite competitor to the weekend warrior. Caffeine is a drug that belongs to a family of compounds known as methylxanthines. Chemically it is known as 1, 3, 7 - trimethylxanthine (Figure 1) and is one of the most active biosynthesised methylxanthines. Figure 1. Structure of 1, 3, 7 - trimethylxanthine (Taken from Graham et al., 1994) ...read more.

2hrs at 80rpm. The results provided further evidence that caffeine ingestion prior to endurance exercise increased performance significantly, stressing the elevated fat oxidation (31%) during the last 70 mins as the principal factor. These initial studies highlighted that caffeine produced a consistent improvement in performance when the exercise is prolonged and involves mechanisms such as glycogen sparing and lipid metabolism. Therefore the majority of research has concentrated on the influence of caffeine ingestion on endurance performance. Caffeine and Endurance Exercise A key study by Graham and Spriet (1991) provided strong evidence in favour of the benefits of caffeine. The experimental protocol consisted of 2 running and 2 cycling bouts of exercise to exhaustion. The four testing occasions were randomised and double blind and was therefore well designed and controlled. The data generated showed increases in the time to exhaustion during the caffeine trial in both modes of exercise therefore eliminating modality as a key factor. Furthermore, the increases were significant; approximately 49.2 + 7.2 min to 71 + 11 min (treadmill) and 39.2 + 6.5 min to 59.3 + 9.9 min (cycling). The study also highlighted that the dose of 9-mg/kg-body weight elicited the benefits to endurance performance whilst remaining below the legal limit in the urine. A later study by Spriet et al. (1992) used the same dose but this time concentrated on cycling to exhaustion at 80% VO2 max. Again the results showed that the subjects cycled significantly longer during the caffeine trial than the placebo trial (96.2 + 8.8 min compared to 75.8 + 4.8 min, respectively). However, comparison of the cycling trial in the study by Graham and Spriet (1991) and this later study shows that the increase is greater in the earlier study. This may be attributed to the differing fitness levels of the subjects used in both studies. The first study used competitive runners whereas the later used endurance-trained athletes. ...read more.

The discrepancy highlighted may be down to the fact that the control subjects in the first study were inactive. The subjects in the second study were untrained but not inactive and therefore the increase in FFA reported in the first study may be because the difference in the level of training between the control and the trained group is greater. Conclusions and Recommendations It is clear from the studies highlighted that the evidence for the ergogenic benefits of caffeine is somewhat indefinite. When considering the effects on short-term intense exercise and maximal anaerobic power the findings suggest no apparent actions unless the duration was more than a few seconds. The most interesting area that has produced significant data seems to be endurance activity but again the there has been some contradictions in the results concerning doses. The reason behind theses variable results could be attributed to differing experimental protocol adopted by each study. Another factor may be the fact that the actual mechanism of caffeine is not truly known. Three principal cellular mechanisms highlighted in this assignment have all been proposed and it is unsure which one is the definite answer. However research by Fredholm et al. (1999) has provided sound evidence that adenosine receptor inhibition is the most important mechanism based on the high doses required to elicit the other two. The benefits towards exercise also seem to be without severe detriments to health with studies highlighting only mild side effects using the doses needed to produce the reported ergogenic effects. Examination of the past literature has highlighted certain limitations to the work. Review of the studies suggests that the exact ergogenic effects are unclear and equivocal and may be because the studies have been largely poorly designed and controlled. Many have failed to address that response to caffeine will vary greatly between subjects and that there is a dose response effect. It must also be noted that limited research has been performed on resistance training, which must be addressed. ...read more.