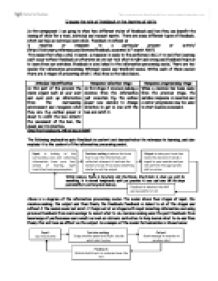 The role of feedback

Discuss the role of feedback in the learning of skills In this assignment I am going to show how different styles of feedback and how they can benefit the leaning of skills for a team, individual and racquet sports. There are many different types of feedback, which can help an individual learn skills. Feedback is defined as 'a reaction or response to a particular process or activity' (http://dictionary.reference.com/browse/feedback, accessed 16th march 2007) This means that when a skill is learnt, a response is made to the performed skill. It is said that learning can't occur without feedback as otherwise we are not told what is right and wrong and feedback helps us to learn from our mistakes. Feedback is also linked to the information-processing model. There are two models for information processing Whiting's model and Welford's model. Within each of these models there are 3 stages of processing which I shall show in the table below. Stimulus identification Response selection stage Response programming stage In this part of the process the sense organs such as your ears and eyes pick up information from the surrounding environment and recognise what they are. E.g. netball player is about to catch the ball detects the movement of the ball, the speed and its direction. In this stage it involves making a decision from the information just collected. E.g. the netball player now decides to change direction to get in line with the ball and catch it. When a decision has been made from the previous stage, the suitable response is selected and a motor programme may be used to start muscle movement. Citied from Honeybourne, Hill and Moors (2004) The following explanation puts feedback in context and demonstrates its relevance to learning, and also explains it in the context of the information processing model. Above is a diagram of the information processing model. The model shows four stages of input, the decision-making, the output and then finally the feedback. ...read more.

Classification of Skill Definition and example Feedback to use Gross Skills that involve large muscle movements, such as shot-put. The best feedback to use would be terminal such as after the throw the coach would comment on the technique. Fine Involve intricate movements using small muscle groups, and involve a high degree of hand-eye co-ordination such as a snooker shot. Intrinsic feedback would be best suited for this skill as only you will know how well you have the hit the ball, and if you co-ordination was good enough and how to change next time. Open Are affected by the environment, and have to be adapted according to it, such as a pass in football. Concurrent feedback is best here as the environment is continually changing your feedback may have to alter also and by doing this you will give the bets feedback. Closed Are not affected by the environment, as it is still e.g. a free throw in basketball Again continuous feedback would be good as you can tell your players to carry on what they are doing and as the environment is staying the same you don't have to change it as much. Self-paced The performer controls the rate at which the skill is executed, and they are quite closely linked to closed skills. For example a javelin throw Intrinsic feedback is good here as you are controlling the speed of the skill and so if it was good you will do the same again but if the opponent did better then you know you would have to change it somehow. Externally paced This is where the environment and things around you control the rate of performing the skill, and involves you to react to it like a serve in tennis. The best feedback to use in this case is knowledge of results, so that you can see how well you have done when you are not controlling what you are doing. ...read more.

to develop autonomy. Appendix 1 Phases of Learning Cognitive - This is the first phase of learning, when performers are doing something for the first time and so need to understand what is being done. In this phase trial and error helps the performer to progress as they can use there past failures to help them avoid this mistake in the future. So they need to understand why they failed in order to rectify it. To make sure the new performer understands completely the teacher may need to show demonstrations or other guidance so that he performer can recognise what is most important to follow. Associative (motor) - In this phase the performer practices and associates their movements with a mental image in their head produced from past experiences. This sis where feedback now starts to occur and you tell the performer where they are going wrong and the learner gradually becomes more aware of complex cues. This is also where you'd start to see a vast improvement in performance. Autonomous - This is the final phase of skill-learning and movements are becoming automatic without any thought process. The performer will ignore the environment around them and concentrate on peripheral strategies and tactics. Reaction times are shorter as the motor skills are stored in the long-term memory. Most performers would not stay in this phase as they need to continuously refer back to the associative phase to reinforce motor skills. Paraphrased form Honeybourne, Hill and Moors (2004) Appendix 2 Thorndike's 'laws' He developed a theory based on strengthening the S-R bond. Law of exercise Repeating or rehearsing the S-R connections is more likely to strengthen them. If the desired response occurs, reinforcement is necessary. Law of Effect If the response is followed by a satisfier, then the S-R bond is strengthened, but if it's followed by an annoyer the bond is weakened. This means pleasant outcomes are likely to motivate the performer to do it again. Law of readiness The performer must be physically and mentally able to complete the task effectively. ...read more.