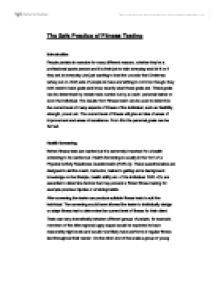 The Safe Practice of Fitness Testing.

The Safe Practice of Fitness Testing Introduction People partake in exercise for many different reasons, whether they're a professional sports person and it is their job to train everyday and kit fit or if they are an everyday Joe just wanting to lose the pounds that Christmas turkey put on. Both sets of people do have something in common though, they both need to have goals and know exactly what those goals are. These goals can be determined by certain tests carried out by a coach, personal trainer or even the individual. The results from 'fitness tests' can be used to determine the current level of many aspects of fitness of the individual, such as flexibility, strength, power etc. The current level of fitness will give an idea of areas of improvement and areas of excellence. From this the personal goals can be formed. Health Screening Before fitness tests are carried out it is extremely important for a health screening to be carried out. Health Screening is usually in the form of a Physical Activity Readiness Questionnaire (PAR-Q). These questionnaires are designed to aid the coach, instructor, trainer in getting some background knowledge on the lifestyle, health ability etc. of the individual. ...read more.

Validity, Reliability and Testing Protocol's When performing fitness test there are 3 very important aspects to consider. These are... * Validity * Reliability * Testing Protocol's If anyone of these aspects is missing then the results of the test may be ignored or considered worthless. Validity - Validity is the meaningfulness of a set of data. Are the results measuring what is desired? Is there a point in getting a golfer to perform a bleep test? Are the results of the bleep test valid to the sport of golf? It is very easy to perform test on performers and make generalisations based on the results, which can lack validity. For example the bench-press 1 rep max test, is often used to test strength. The bleep test only uses muscles in the upper body so is it valid to test the strength of say a sprinter who predominantly uses leg power? The validity of fitness test is very important to obtain and interpret suitable results. Reliability - Reliability is a measure of how consistent and repeatable the tests are. If a coach performed a certain test on his players, would someone else who performed the same test on the same players obtain the same results? ...read more.