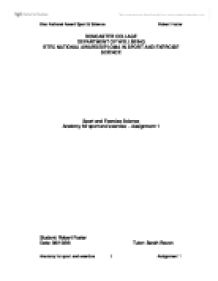 The skeletal systems relative to Sport and exercise actions

DONCASTER COLLAGE DEPARTMENT OF WELLBEING BTEC NATIONAL AWARD/DIPLOMA IN SPORT AND EXERCISE SCIENCE Sport and Exercise Science Anatomy for sport and exercise - Assignment 1 Student: Robert Foster Date: 06/10/06 Tutor: Sarah Raven The skeletal systems relative to Sport and exercise actions Introduction In this booklet I will be investigating the structure, functions and development of the skeleton and relate the structure of joints to the movement they permit. The Skeleton The human skeleton consists of 206 bones. The human body is born with more bones (about 300), but many fuse together as a child grows up. The bones support the body and allow the body to move. Bones contain a lot of calcium (an element found in milk, broccoli, and other foods). Bones manufacture blood cells and store important minerals. The bones of the Skeleton can be grouped in two divisions: axial skeleton and appendicular skeleton. Axial skeleton The axial skeleton forms the central axis of the body. It consists of the skull, the, ribs the vertebral column and the sternum or breastbone. Skull The skull consists of 28 different bones (including the ear bones). The bones of the skull can be divided into two main groups: the cranium which encloses and protects the brain and the facial bones The cranium (Reference of picture http://en.wikipedia.org/wiki/Image:Gray_188_-_Side_view_of_the_skull.png) The cranium consists of eight flat bones which are rigidly attached to each other with dentate sutures (joints with teeth-like protrusions). They envelop and protect the brain. The frontal bone forms the forehead and portions of the eye sockets. The occipital bone, at the base of the skull contains a large opening, called the foramen magnum, through which the spinal cord passes. On each side of the opening is the occipital condoyle, two round protuberances were the skull articulates. The organs of hearing are situated in the temporal bone, one on each side. The openings leading into these organs can also be seen on each side. ...read more.

At the other end, the femur widens to form two large knobs which form the hinged knee joint with the main long bone (tibia) of the lower leg. On the front side of these two condyle's, there is an articular surface against which the kneecap (patella) slides. The patella is a small, triangular, flat bone which develops on the tendon of the thigh muscle and is attached by ligaments to the tibia. This enables movement in the knee joint The Lower Leg (Reference of picture http://www.patient.co.uk/showdoc/21692493/..%5Cimages%5CI77_L.JPG) The two bones of the lower leg are the tibia (shinbone) in front and the fibula behind. The tibia is the bigger of the two and extends from the knee to the ankle. The upper end of the tibia has two articulating facets into which the condyle's of the femur fit to form the knee joint. The lower end of the tibia articulates with one of the tassels to form the ankle joint. The fibula is smaller than the tibia and is on the outside also it is slightly behind the tibia. The upper end articulates with the tibia but does not form part of the knee joint. The lower end forms part of the ankle joint. The Ankle (Reference of picture http://www.scoi.com/images/scoi-ankle-main.jpg) There are seven short, thick tarsal bones, the one is the heel bone, which presses firmly onto the ground when a person stands walks or runs. The calf muscles are attached to the calcenum, allowing the heel to be lifted during movement. The Arch of the Foot (Reference of picture http://www.gutenberg.org/files/13910/13910-h/images/fig06-17.png) The arch is formed partly by some of the tassels but mainly by the five long metatarsals, which extends from the tassels to the toes. The arch is modified for receiving the weight of the body. Some people are born with out arches and it is known as flat feet. They usually wear Orthotic Innersoles (Docpods) ...read more.

Type I fibres are red, split ATP at a slow rate, have a slow contraction velocity, very resistant to fatigue and have a high capacity to generate ATP by oxidative metabolic processes. Such fibres are found in large numbers in the postural muscles of the neck Type II A Fibres These fibres, also called fast twitch or fast oxidative fibres, contain very large amounts of myoglobin, very many mitochondria and very many blood capillaries. Type II A fibres are red, have a very high capacity for generating ATP by oxidative metabolic processes, split ATP at a very rapid rate, have a fast contraction velocity and are resistant to fatigue. Such fibres are infrequently found in humans. Type II B Fibres These fibres, also called fast twitch or fast glycolytic fibres, contain a low content of myoglobin, relatively few mitochondria, relatively few blood capillaries and large amounts glycogen. Type II B fibres are white, geared to generate ATP by anaerobic metabolic processes, not able to supply skeletal muscle fibres continuously with sufficient ATP, fatigue easily, split ATP at a fast rate and have a fast contraction velocity. Such fibres are found in large numbers in the muscles of the arms. (Reference used http://www.brianmac.demon.co.uk/muscle.htm) Sliding filament theory of contraction The mechanism of filament sliding during contraction of a myofibril. In the absence of calcium ions, tropomyosin blocks access to the mysosin binding site of actin. When calcium binds to troponin, the positions of troponin and tropomyosin are altered on the the thin flament and myosin then has access to its binding site on actin. Myosin hydolyzes ATP and undergoes a conformational change into a high-energy state. The head group of myosin binds to actin forming a cross-bridge between the thick and thin filaments. The energy stored by myosin is released, and ADP and inorganic phosphate dissociate from myosin. The resulting relaxation of the myosin molecule entails rotation of the globular head, which induces longitudinal sliding of the filaments. When the calcium level decreases, troponin locks tropomyosin in the blocking position and the thin filament slides back to the resting state. ...read more.