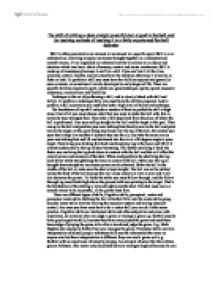 The skill of striking a clean straight powerful shot at goal in football, and the teaching methods of teaching it to a fairly experienced football defender

The skill of striking a clean straight powerful shot at goal in football, and the teaching methods of teaching it to a fairly experienced football defender Skill is often perceived as an element or movement in a specific sport. Skill is a co-ordinated act, involving complex movement brought together in a consistent and smooth manor; it's an organised co-ordinated activity in relation to an object and situation which involves a chain of sensory, control and motor mechanism. Skill is made up of consistency because it can't be a skill if you can't do it all the time, accuracy, control, fluidity, and you must have the intention otherwise it is known as fluke or luck. To perform a skill you must have the abilities required and generally seen as innate, or sometimes it can be developed in early stages of life. There are specific abilities required in sport, which are; good technique, agility, speed, muscular endurance, reaction time and flexibility. Technique is the act of performing a skill, and is closely linked with skill and ability. To perform a technique fully, you must have the abilities required. And to perform a skill accurately you must have both a high level of ability and technique. ...read more.

football with no experience of actually playing. An example of some like this is Sven goaran Eriksson, who never actually played but now manages England because he can read the game well and has a great interpretation of the game. Perceptual motor skills are involves the vast majority of skills, thought, Interpretation and movement. All skills are believed to fit to a continuum called Knapp's continuum. The continuum is between closed to open and ranges from1-10, 1 being closed and 10 being open. Closed skills which are nearer to 1 on the continuum have no outside physical influences affecting the skill; it means that the skill remains the same every time you perform it weather it's in a practice session or in a game situation. For example a basketball free throw is a closed skill because it is the same every time there are factors affecting it. An open skill would be placed nearer to 10 on the continuum. Open skills are directly influenced by the environment. They require an adaption or an alteration to the skill every time it is performed. It could be caused by the weather, pitch conditions, opponents, spectators, fitness, equipment and ability. ...read more.

There different ways a teacher or coach teach a skill or activity depending on the individual learner. This is called guidance, and there are 3 types of guidance. Visual, verbal, and mechanical. Visual guidance involve the use of visual aid, and normally suitable for beginners, because it's an easier way than an explanation that inexperienced individuals may not understand so they get an visual aid to help. For example when shooting in football the teacher could actually show where to hit the ball and where to put your feet, because for some people it's easier if they see where to place their feet rather than being told and not shown. It allows the learner to use visual stimuli to perform the skill. Verbal guidance is the teacher only being verbal and telling what to do instead of actually using visual guidance. This can be beneficial as long as instructions are clear and concise. This is more beneficial for player who are experienced and who can listen so is not really suitable for young beginners. Mechanical guidance is physically restraining the learner on a certain aspect of the skill when performing it. So he does the right things but is restrained on things he is doing wrong so this helps gain muscle memory and how the skill should feel. ...read more.