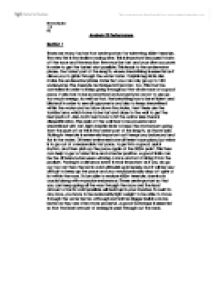 There are many factors that are important for swimming 400m freestyle. The very first is the shallow racing dive. This is important because it starts off the race and the reaction time must be fast

Analysis Of Performance Section 1 There are many factors that are important for swimming 400m freestyle. The very first is the shallow racing dive. This is important because it starts off the race and the reaction time must be fast and your dive accurate in order to get the fastest start possible. This leads to the underwater phase, the fastest part of the length, where streamlining is essential as it allows you to glide through the water faster. Dolphin leg kicks also make the underwater phase faster but you can only go up to 15m underwater. The freestyle technique is important, too. This must be controlled in order to keep going throughout the whole race at a good pace. It also has to be economical and powerful so as not to use up too much energy. As well as that, the breathing has to be efficient and bilateral in order to see all opponents and also to keep streamlined within the water and not slow down the stroke. Next there are the tumble turns, which have to be fast and close to the wall to get the best push off. Also, both feet have to hit the wall or else there is disqualification. The push off the wall has to be powerful and streamlined with fast, light dolphin kicks to keep the momentum going from the push off as this is the fastest part of the length, as I have said. ...read more.

The slow motion freestyle makes you kick more frequently and faster because if you don't then you would start to sink. I would do these 50's off a time of 65 seconds. To take this further I could do more 50's or make the 25m swim at a fast pace to put the drill to the test in sort of race conditions. My streamlining off the walls is very scrappy and needs working on. I could do 5 x 50m, push off the wall as hard as possible without kicking and just streamlining, and go as far as possible but from push off to 5m it is timed. It is then an easy swim to the other end. These 50's would be off a time of 70 seconds. This drill is good for improving both push off the wall and streamlining, as you have to streamline to go trough the water smoother. Also, because they are timed, you can assess the progress throughout the weeks. To make this even harder I could add a tumble turn to the start, so that it is more like a real situation. The last skill I need to practice is to do with my technique. Although it is only a small problem, it is best to sort it out sooner than later. My right hand enters the water outside of my bodyline quite often, usually when I start to get tired, and to fix this I need to do some drills. ...read more.

My speed should have been improved over the 6-week training programme. This is because of the specificity of the set and recording the times in order to compare. The skills which I would have worked on would also have come into action here, as they will help to make me faster in themselves without specifically working on my speed. My muscular endurance would have improved slightly from the overload in the set. The overload meant I would have had to keep going through the fatigue from the lactic acid build up which means my body would have to adapt quickly to it. Therefore in a race situation, I would be able to keep going longer without getting tired because of the adaptation. The stroke rate during my freestyle should have decreased and I should have been able to go fast without doing as many strokes. This is from working on my technique and making it stronger in order to get a better catch and pull my self through the water quicker. Finally, my body shape will not have changed very much over the training programme, but I might have lost some weight because of doing a lot of exercise. Also, because swimming is essentially a form of endurance training, my muscles should have got more efficient at using oxygen, my V02 Max will have increased and I would have more capillaries from capillarisation, so that muscles can get more oxygen. ?? ?? ?? ?? Emma Burke 11F PE ...read more.