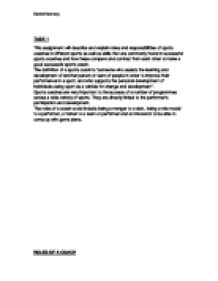 TASK 1 This assignment will describe and explain roles and responsibilities of sports coaches in different sports as well as skills that are commonly found in successful sports coaches and how these compare and contrast from each other to make a good successful sports coach. The definition of a sports coach is "someone who assists the learning and development of another person or team of people in order to improve their performance in a sport, and who supports the personal development of individuals using sport as a vehicle for change and development". Sports coaches are very important to the success of a number of programmes across a wide variety of sports. They are directly linked to the performer's participation and development. The roles of a coach could include being a manger to a club, being a role model to a performer, a trainer to a team or performer and an innovator to be able to come up with game plans. ROLES OF A COACH Innovator A sports coach has to be a good innovator to have the ability to think through tough problems using his experience and knowledge form his sport to make new ideas and form new approaches. ...read more.

Role Model Coaches are usually big role models to the performers especially if the performer is young, as the coach will be their source of inspiration. Younger performers often want to be like their role model therefore the coach has to be a good role model and set a good example. A coach acting as a role model can influence a performer's development in a number of ways such as: socially, players will learn to play fair, learn to be able to cooperate with in a team therefore having good teamwork. Personally, life skills can be learnt from a role model such as better self esteem and mannered. Psychologically, role models can help create an environment that helps relax the performer as well as getting control over the performer's emotions. Health, they can design sessions to include a good amount of physical exercise, good health and good health habits can be made. An example of a coach being a role model would be setting a positive attitude in training so the performers give their best and also having a well behaved social life so the performers think this is the way they should act. ...read more.

Professional Conduct A coach must demonstrate appropriate personal and professional behaviour and conduct. A coach must be licensed and insured to coach the sport and people he is coaching. They must work in accordance to the law and relevant legislation. Equal Opportunities Discrimination can come in many forms. It is essential that as a coach the approach and attitudes adopted are fair and equal towards all of the participants, especially if working with young and impressionable players. Discrimination can be in the form of the obvious racist, sexist, homophobic and ageist but there are overlooked ones such as ability and background. Better players may adopt an ego and expect preferential treatment over the rest of their team mates; this should not be allowed to happen. The same rules and discipline should be the same for every individual. Amount of game time allowed to each player is also a form of discrimination, if a player is left out every week because they are not as good as the rest or only receive a few minutes this is unfair on them, even greater importance if the player is still young ?? ?? ?? ?? Daniel Kennedy ...read more.