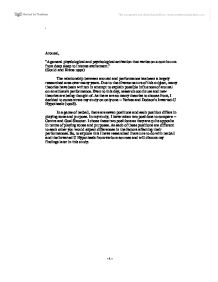 To what extent will arousal influence preformance in netball.

AROUSAL Arousal, "A general physiological and psychological activation that varies on a continuum from deep sleep to intense excitement." (Gould and Krane 1992) The relationship between arousal and performance has been a largely researched area over many years. Due to the diverse nature of this subject, many theories have been written in attempt to explain possible influences of arousal on an athlete's performance. Even to this day, research continues and new theories are being thought of. As there are so many theories to choose from, I decided to concentrate my study on only one - Yerkes and Dodson's Inverted-U Hypothesis (1908). In a game of netball, there are seven positions and each position differs in playing zone and purpose. In my study, I have taken two positions to compare - Centre and Goal Shooter. I chose these two positions as they are quite opposite in terms of playing zones and purposes. As each of these positions are different to each other you would expect differences in the factors affecting their performances. So, to explore this I have researched literature to do with netball and the Inverted U Hypothesis from various sources and will discuss my findings later in this study. ...read more.

DISCUSSION Netball is a fast-moving and tactical game. In high level games, decision are to be made very quickly and carried out very quickly, so an optimum level of arousal should enable you to do so efficiently. However, it is not yet definite how optimum levels of arousal are decided, although there are theories to suggest so like Yerkes and Dodson's Inverted-U Hypothesis. The Inverted-U hypothesis was devised in 1908 by Yerkes and Dodson. They predicted the relationship between arousal and performance to be curvilinear rather than linear like Hull's Drive Theory. Performance is supposed to increase as a performer's arousal/anxiety levels increase up to a certain point (optimum). Apparently, when a performer is considered to be at this optimum level they will perform their best, but any further increase in arousal will cause their performance to decline in proportion to how much over the limit they are. In netball, the Goal Shooter and Centre have two different roles. The role of the Centre is to initiate attack throughout the game and be the link between the defending and attacking players. The playing area is very large - almost the whole court except the two D's either side. The Goal shooter has a much smaller playing zone compared to the Centre. ...read more.

There is a vast amount of information about arousal, stress and anxiety and it would probably take me many years to come to a justified conclusion to my original problem. Another problem I had was that I couldn't get hold of any relevant information linking directly to netball. What I could have done is get hold of research in another team sport and applied it to my case. I feel that I did not use my research to the best of my ability as I have missed out many points, which could also link in with this issue, but due to the time constraint I had to cut a lot out Throughout my study, I did not refer back to my introduction as much as I could have and I didn't refer to my sources much in my discussion. This has sort of made my study drift away from my point and it did not link in together as well as it could have. To extend this project I could conduct tests with various netball teams to get real results and by analysing these results make a real conclusion. I could compare different levels to see if skill level affects performance under pressure, if so then how. - 1 - ...read more.