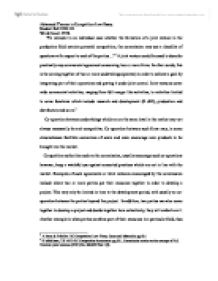 Treatment to Joint Ventures Under The European Commission On Merger Regulations.

"To evaluate in an individual case whether the formation of a joint venture in the production field restricts potential competition, the commission may use a checklist of questions with respect to each of the parties..."1 A joint venture could be used to describe practically any commercial agreement concerning two or more firms. In other words, this is the coming together of two or more undertakings (parents) in order to achieve a goal by integrating part of their operations and putting it under joint control. Joint ventures cover wide commercial activities, ranging from full-merger like activities, to activities limited to some functions which include research and development (R &D), production and distribution and so on.2 Co-operation between undertakings which are on the same level in the market may not always necessarily be anti-competitive. Co-operation between such firms may, in some circumstances facilitate economies of scale and even encourage new products to be brought into the market. Competition authorities such as the commission, usually encourage such co-operations however, keep a watchful eye against concerted practices which are not in line with the market. Examples of such agreements or Joint ventures encouraged by the commission include where two or more parties put their resources together in order to develop a project. This may only be limited in time to the development period, with usually no co-operation between the parties beyond the project. In addition, two parties can also come together to develop a project and decide together how collectively, they will embark on it. Another example is when parties combine part of their resources in a particular field, thus initiating a new jointly-owned corporate channel, with its own administration and resources, that is, finance, staff, and so on, to enable it manage its activities on a long-lasting basis. In the case of Hitachi/Necdram/Jv3, this form of activities was found since after a joint venture was established, the commission found that after two years, the joint venture established an independent channel and had exclusive use of its own brand. ...read more.

Treatment of Article 81(3) under the new regulations on Joint ventures. Under the new rule, the commission retains the power to decide that article 81(1) does not apply to an agreement only in exceptional circumstances., hence it will no longer be possible for parent undertakings to notify an agreement for exemption under article 81(3). The manner in which the commission approached clearance in individual cases will remain the same as previously and will form the basis for decisions and also provide guidance for the parties assessment of whether an agreement falls within article 81. Under the new rule, the commission approached certain types of joint ventures differently in applying article 81(3). One of these would be discussed. In research and development, the joint ventures are usually protected by way of the research and development block exemptions.32 Under this block exemption rule, the parties have to prove that market power that is created or enhanced by through the research and development joint venture must show significant efficiencies on the on the market. In other words, the parties have to show that the agreement would not lead to a market foreclosure and also that the agreement would not cause a negative effect on the market by restricting innovation, thus leading to a co-ordination of behaviour. If the joint venture combines their co-operation, for example, research and development or purchasing, the commission first determines the outset of the agreement. In such cases, assessment will start with the first level of co-operation, that is, the research and development. After this is successful, then assessment would begin on the joint production aspect. Conclusion. The commission, through the European Commission Merger Regulation and Article 81(1) and (3) has used different approaches in its attitude towards joint ventures and horizontal co-operations. The policy set out in these two statutes is aimed to take a realistic view based on economic analysis of whether an agreement really does restrict competition and focus on market power as the main concern for competition authorities. ...read more.