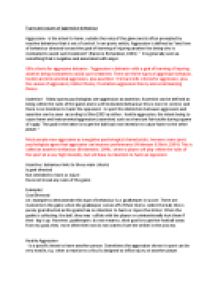 Types and causes of aggressive behaviour in sport

Transfer-Encoding: chunked ï»¿Types and causes of aggressive behaviour Aggression-â¯ is the intent to harm, outside the rules of the game and is often prompted by reactive behaviour that is out of control.â¯In an sports article, Aggression is defined as “any form of behaviour directed toward the goal of harming of injuring another live being who is motivated to avoid such treatment” (Baron & Richardson, 1994) 1 It is generally seen as something that is negative and associated with anger. Gills criteria for aggressive behavior: “Aggression is behavior with a goal of harming of injuring another being motivated to avoid such treatment. There are three types of aggressive behavior, hostile and instrumental aggression, plus assertion. We have Gills criteria for aggression, plus the causes of aggression; instinct theory, frustration-aggression theory and social learning theory. Assertion- Many sports psychologists see aggression as assertion. Assertion can be defined as being within the rules of the game and is well-motivated behaviour this is more in control, and there is no intention to harm the opponent. In sport the distinction between aggression and assertion can be seen according to Silva 1983 as either : hostile aggression, the intent being to cause harm and instrumental aggression (assertion) such as a hard yet fair tackle during a game of rugby. The goal in the latter is to get the ball back not intention to cause harm to the other player.2 Most people view aggression as a negative psychological characteristic, however some sport psychologists agree that aggression can improve performance (Widmeyer & Birch, 1984). This is called an assertive behaviour (Bredemeier, 1994), where a player will play within the rules of the sport at a very high intensity, but will have no intention to harm an opponent. Assertive: behaviour links to three main criteria: Is goal directed Not intended to harm or injure Does not break any rules of the game Examples: Goal Directed: An example to demonstrate this type of behaviour is a goalkeeper in soccer. ...read more.

In sport setting, arousal is often linked to anxiety. Anxiety is percieved as a negative emotional state with feelings of worry, nervousness this is linked with the arousal and the nervous system. In general, arousal has two kinds of effects on performance. First, it increases muscle tension and affects co-ordination. Too much tension is negative on performance. Second, arousal affects attention. Therefore, attention can become either too narrow with too much arousal, or too broad with too little arousal which makes person to pay too much attention to their environment. There are several theories as to how arousal affects performance: The Drive Theory : Drive theory states a linear positive corollation between arousal and performance. This means that at low levels of arousal, performance is low whereas it increases in line with an increase in arousal. Drive theory became popular during the 1950s as a way to explain behavior and motivation The drive theory of arousal is the link between performance levels and arousal levels. This means that an increased/decreased arousal is exactly proportional to the increase/decrease in the level of the athletes overall performance. So bascailly Drive theory states how good you are e.g. beginner or expert is triggered by your level of arousal. Christiano Ronaldo is a professional footballer. According to the drive theory the more aroused Ronaldo become the better he will play Ronaldo's performances is known as his dominant response, which is how he usually plays, normally at a high standard, Ronaldo will become more aroused throughout the game as the pressure increases as the team and crowd want to win . The idea is that arousal is linked to the dominant response which becomes activated. The dominant response is activated basically because it is the most learnt and for athletes it will be a response they have been prepared or trained for. According to the drive theory as the pressure increases Ronaldo's ability to perform will keep increasing and have no limit. ...read more.

Some athletes seek out stressful situations as it may help them increase there skill level and focus their attention more on their chosen sport. For example: Andy Murray felt the pressure and stress to win Wimbledon 2013, as he will end Britain's 77-year wait for a men`s champion. He felt the stress because all his fans in Britain were supporting him to win and he also wanted to win himself which gave him even more motivation to win. He felt the stress to win as he was playing the world number one, which meant his skill level improved rapidly and he kept his focus to win, which resulted in Andy Murray winning his first ever Wimbledon title. Distress This is our `bad` stress. This is when a situation gets the best of us, and can lead to `choking`. This is normally what we mean when we discuss stress. Many athletes suffer with this type of stress. It is an extreme form of anxiety, nervousness, apprehension, or worry. When athletes get this type of stress they may struggle to meet their demands in their chosen sport. For example: David Nalbandian was disqualified because he couldn`t cope with his stress levels.When Nalbandian was playing in the Aegon Championships 2012 he lost control of his stress and it turned into anger. This resulted in him kicking the box the line judge was sat in and injuring the line judge. This happened because Nalbandian won the first set winning the tie break at 7-3. This would put some stress on the tennis player, unfortunately the stress caused his skill level to decrease. Then in the second set his opponent broke his serve. Nalbandian didn't play his best double faulting at points. When he missed a hard return he lost that game. This stress caused him to get angry uncontrollably. â¯Alan Lawâ¯,â¯â¯Christos Halkiopoulosâ¯,â¯Christian Bryan; Psychology for the IB Diploma; 2010, Pearson 3 ...read more.