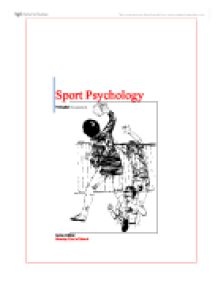 Using Sport Psychology to Help my Performance in Volleyball.

Sport Psychology Volleyball Assignment James webber Monday 22nd of March Sports Psychology is the study of the psychological and mental factors that influence and are influenced by participation and performance in sport, exercise, and physical activity (Dr. Arvid J. Bloom at West Chester University). This is especially important for elite athletes, as mental preparation is capable of giving them the edge over physically equal opponents. The hypothesis that has been tested and evaluated was that a combination of both Imagery and physical practices was more effective than either imagery or practice alone. Throughout this essay the topics, goals setting, relaxation techniques, imagery, self talk, arousal, motivation levels and physical performance as a result of the imagery training undertaken, will be highlighted and evaluated as being key components of the imagery program. Goal setting has to main uses in terms of sporting context. One is to serve as a reference standard for comparative purposes e.g. moods and performances as well as serving as a focal point for athletes to determine pre-competition, and competition strategies (Pyke, F). The goal setting concept was divided into three types of goals, outcome, and performance and process goals. Outcome goals also comically labelled ego goals, (Wilson, G) and are goals that are not generally determined by the athletes' personal preparation but instead by the amount of perpetration the athlete's opposition has had (Wilson, G). ...read more.

This combination achieved its intended purpose and was the most effective form of relaxation. Imagery is the process of mentally re-living/ reconstructing an image of an event or activity, without making any physical movements that involves all sight, hearing, smell, taste, touch and movement (Australian Institute Of Sport). Having created a program in class it was then put into practice, however the class was instructed to perform the relaxation and imagery before any physical activity due to time constraints. This effectively decreased the overall effectiveness of the session, as Williams, J states that it is best to do the imagery training after a workout as it is easier to let go after having had some exercise. The imagery and relaxation was to be completed in ten minutes. Four minutes to achieve a relaxed state and six minutes to complete the imagery processed that were repeated ten times each. The process of replaying the images was hindered by many factors varying from the cold hard floor that was used, the constant humming of the lights to the noise of the groundsmen tractors and construction noise that was occurring just outside the gymnasium. At first the environment played a large role in my inability to maintain focus, which ultimately in conjunction with my inexperience on the topic resulted in an inconsistent level of imagery. Focus levels and imagery quality were generally average for the first week of practice. ...read more.

My level of volleyball has increased by such a significant margin due to the extra amount of practice that I have undertaken, four class sessions a week, two training sessions and an official match week in and week out. This has increased the amount of confidence and self believe I have in myself to achieve as well as have a large amount of volleyball time to correct any technical details. However this can only be accredit for so much of an improvement, the coaches both Coach Walsh and Coach Strathdee proved vital instruments in my development as a volleyball player, giving their experience and insight to various characteristics of volleyball. although it must be said that the mental imagery produces the least amount of visual results but nevertheless proved to have assisted me in developing a sense of fluency whilst playing volleyball as well as proving vital in increasing the effectiveness of myself talk method, allowing me to bounce back on several occasions where my performance has been less than impressive. The imagery was hindered by the appalling conditions that were present and the time constraints that effectively ended any chances of improving my ability to process images several times in my mind. Considering all factors in which the program was run and external factors that contributed to the overall result, my volleyball level is substantially higher that what it was at the start of the season. ...read more.