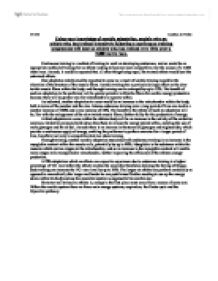 2/11/02 Jonathan de Vletter Using your knowledge of aerobic adaptation, explain why an athlete who has trained intensively following a continuous training programme will beat an athlete who has trained very little over a 5,000 metre race. Continuous training is a method of training to work on developing endurance, and so would be an appropriate method of training for an athlete looking to become more competitive over the course of a 5,000 metre race. As such, it could be expected that, all other things being equal, the trained athlete would beat the untrained athlete. One adaptation which could be expected to occur as a result of aerobic training would be the alteration of the structure of the muscle fibres. ...read more.

Intense endurance training over a long period of time can lead to a number increase of 100% and a size increase of 40%. The benefit to the athlete of such an adaptation will be, like with the enlargement of the slow twitch muscle fibres, further ability for the production of energy. A third adaptation to occur within the athletes body will be an increase in the activity of the oxidative enzymes. Oxidative enzymes break down food fuels to release the energy stored within, enabling the use of more glycogen and fat as fuel. As such there is an increase in the stores of glycogen and triglycerides, which provide a continuous supply of energy, enabling the performer to perform exercise for a longer period of time, beneficial not only in competition but also when training. ...read more.

A fifth adaptation which an athlete can expect to experience due to endurance training is a higher percentage of VO max before the athlete reaches the anaerobic threshold, delaying the feeling of fatigue. Such training can increase the VO max level by up to 20%. The longer an athlete can perform aerobically as opposed to anaerobically the longer and harder he can push himself before needing to use up the energy stores within his body and use his anaerobic system as opposed to his aerobic one. However well trained an athlete is, energy in the first place must come from a source of some sort. Within the aerobic system there are three main energy systems; respiration, the Krebs cycle and the Glycolitic pathway. ...read more.