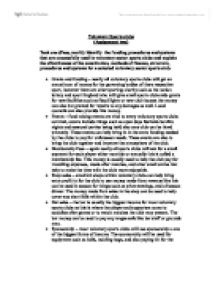 Voluntary Sports clubs (Assignment two) Task one (Pass, merit): Identify the funding procedures and systems that are successfully used in voluntary sector sports clubs and explain the effectiveness of the constitution, methods of finance, structure, procedures and systems for a selected voluntary sector sports club. * Grants and funding - nearly all voluntary sports clubs will get an annual sum of money for the governing bodies of there respective sport, however there are other sporting charity such as the nation lottery and sport England who will give small sports clubs side grants for new facilities such as flood lights or new club houses the money can also but granted for repairs to any damages as well. Local councils can also provide this money. * Events - fund raising events are vital to every voluntary sports clubs survival, events include things such as open days festivals bonfire nights and seasonal parties being held also ome club can be hired privately. These events can help bring in in the extra funding needed by the clubs to pay for unforeseen needs. These events are also to bring the club together and improve the atmosphere of the club. * Membership Fees - again nearly all sports clubs will ask for a small payment for each player either monthly or annually this is called a membership fee. This money is usually used to help the club pay for travelling expenses, meals after matches, and other small extras that help to make the time with the club more enjoyable. * Shop sales - small kit shops within voluntary clubs can help bring extra profit in for the club to use money made from revenue like this can be used in season for things such as prize evenings, end of season dinner. The money made from sales in the shop can be used to help cover any short falls within the club. ...read more.

break point resulting in the club losing money The events allow a excellent opportunity to bring attention to the club and offer a great opportunity to gain an income but if the interest in the events of not great then the club could end up losing money. These type of money income is very popular and are usually very successful. Membership Fees Advantages:- * This provide a steady income * The money can be guaranteed Disadvantages:- * Prices of membership my be too high for members to pay * Money may not be enough The membership fee is a steady reliable cash income that the club can use freely but the cost of the membership need to be at an affordable price. The more members there are the lower the membership can be. Shop and Bar sales Advantages:- * Bar allows a place for members to socialise * Bar and shop allow money to be spent at the club giving the club extra income Disadvantages:- * Drunks can cause damage in the club * Money spent on the drink by the club may not match the amount the members spend meaning the club loses money. The bar and shop allows extra money to flow in and a place for the supporters and members to purchase team kit and drinks allow the club to be more hospitable. Task Three (pass, merit) identify the barriers affecting the success of the selected voluntary sports clubs and Explain the barriers. Below are some examples of barriers that may affect a voluntary sports clubs progression: * Retaining original players dues to school and college years etc... most players will play to 16 or 18 and then leave due to work or colleges and universities they have joined elsewhere resulting in the u17 18 and colts teams the clubs hold will struggle and there the development of the senior teams will cease. ...read more.

To make it better there would need to be deadlines set in order to allow the action plan to run on a certain time scale so it can be monitored. There are two steps in the plan that will benefit that club the most these steps are step 5 and step 6 these steps will ensure the coaches are kept after the club has paid for their course. This will ensure that the club does not lose out and in the long term saves money. By having a step that advises to repeat the process annually the club will be constantly bringing higher levels of coaching through and therefore improve the standard of players at the club. Overall the reputation of the club will encourage future players to join and therefore bringing n more revenue. This action plan for combating the problem of rival club is based around the promotion of the club and its player in order to keep the club in the attention of the public and the surrounding clubs and media through the use of promotion. The action plan is set up in easy to read and easy to follow steps which should be followed in order to create the best effectiveness. To improve the action plan I should include deadlines so the action plan has a time limit to get steps completed instead of brief times spans such as; preseason. In the action plan I should have also specified more on how the club could be promoted to both non member and members through communication such as emails and web updates I should have also gone into depth on the effectiveness of the clubs website As with the first action plan I have included a step at the end which asks to repeat the whole action plan again at the beginning of the next season becomes this will constantly keep the club in the limelight. ...read more.