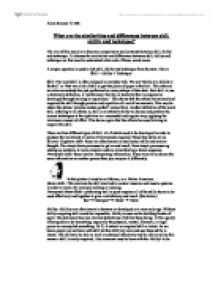 What are the similarities and differences between skill, ability and technique?

(See below) See Interpret Think Move Ability: Abilities are often innate in humans or developed at a very early age. Without ability acquiring skill would be impossible. Ability is seen as the building blocks of sport. The dictionary has two relevant definitions of ability these being. 1) The quality of being able to do something, especially the physical, mental, financial, or legal power to accomplish something. Or 2) A natural or acquired skill or talent. As we know people are not born with skill yet the ability to learn and use those skills is innate. The ability to be able to learn a technique effectively and be able to utilise this means a skill is easily acquired. Also someone may be born with the 'ability' to be able to run fast, this may well be down to being born with fast-twitch muscle fibres, and also the ability to learn the correct running technique and muscle positions well. Technique: This is the term used to describe how skill is acquired. ...read more.

Circumstances of course dictate when a skill can be obtained, it is no use in teaching a 5-year-old child the same techniques at the same level as a professional athlete as the natural ability in being able to perform these tasks is not yet developed. As we can see there is a clear similarity between skill and ability, this being the cranial ability people are born with and the cognitive skill people can obtain. Also the link between skill and technique, as perceptual motor skills come from learning a technique that may be general or specific. This could be walking as general and a safe and effective tackle in rugby. Both of these require the technique to be learnt by developed cognitive skills and the execution of these techniques as a skill using perceptual motor skills. This then means that the ability to perform these techniques as skills is needed, from having the required ranges of movement in the body to using natural cranial ability to learn them. All three are interlinked but none are the same although similar. Allan Rimmer 12 MR ...read more.