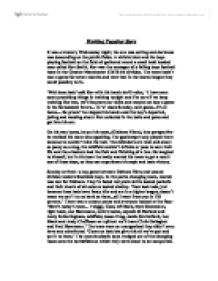 Working Together Story It was a blustery Wednesday night; the sun was setting and darkness was descending on the public fields. A whistle blew and the boys playing football on the field all gathered round a small bald headed man called Kev Smith. Kev was the manager of a failing boys football team in the Greater Manchester U16'S 4th division. The team hadn't won a game for seven months and were last in the lowest league they could possibly be in. 'Well done lads' said Kev with his harsh shrill voice, ' I have seen some promising things in training tonight and I'm sure if we keep training like that, we'll improve our skills and maybe not lose a game in the foreseeable future... 12 'o' clock Sunday, next game...it's at home.... Be promt' he clapped his hands and the boy's departed, joking and messing about. Kev collected in the balls and poles and got into his car. On his way home, he put his team, (Oldham Fliers), into perspective- he realised his team was appalling. The goalkeeper only played there because he couldn't kick the ball. The defenders are rash and about as pacey as a slug, the midfield couldn't dribble or pass to save their life and the attackers had the flair and finishing of a bus. ...read more.

The clubs morale was also at an all time low and when a team are lacking confidence and morale it is visible by their performances. Kev said to his players while he was getting changed 'If we want to win, we have to believe we're not beaten before we have even played the game.' Kev left and drove off, leaving the boys to change and talk alone. The silent boys than began to murmur amongst themselves until Andy Fotheringham made him self heard among the other boys, he said to them' Lets put in an extra special effort in training next week for Kev and play with some direction for a change, because we all want to, its... it's... just we don't believe we can, but I'm sure if we all tried and felt more confidence on the ball we could pull together and get a result. The boys started to murmur to each other more loudly and they all decided Andy was right and that they should all have some faith in themselves and try and pull off a result for Kev... who gave up his time, week in, week out. Wednesday night arrived, and the team was warming up and running around the field before Kev arrived. ...read more.

The whistle blew and the boys stood still, they didn't know what to do, when it had sunk in they had scored they shouted and ran around pointlessly and even better the last touch the ball got from Chris' head was the final touch of the game and Oldham had ran out 1-0 victors! The disgraced Salford team plodded back in silence to their changing room. In the Oldham changing room the lads were making a hell of a noise chanting some English Anthems like 'We're going to wembley' and 'we are the champions' When Kev came in the boys fell silent. 'For once, today we played as a team who believed in themselves and believe me lads, we played some very attractive football today, we should use this magnificent result as a building block for hopefully many more wins for the club... so lets get ourselves in gear now and take this club into division 3!' said an ecstatic Kev. The boys all agreed with Kev and agreed they should all from now on work more together as a team. 5 years on Oldham Fliers are in division 3 and have attained a respectable league position, and have some talented young players... and yes Kev is still there week in, week out. By Andy Cookson ?? ?? ?? ?? ...read more.