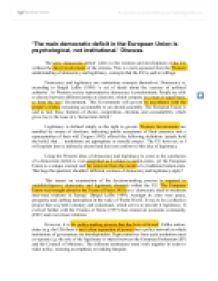 &amp;#145;The main democratic deficit in the European Union is psychological, not institutional.&amp;#146; Discuss.

'The main democratic deficit in the European Union is psychological, not institutional.' Discuss. The term 'democratic deficit' refers to the creation and development of the EU without the direct involvement of the citizens. This is a term spawned from the Western understanding of democracy and legitimacy, concepts that the EU is said to infringe. Democracy and legitimacy are contentious concepts themselves. Democracy is, according to Brigid Laffin (1999) 'a set of ideals about the exercise of political authority'. In Western society representative democracy is predominant. People are able to choose between different parties at elections, which compete on a near or equal basis, to form the next Government. This Government will govern in accordance with the people's wishes, remaining accountable to an elected assembly. The European Union is said to lack these features of choice, competition, elections and accountability which gives rise to the issue of a 'democratic deficit.' Legitimacy is defined simply as the right to govern. Western Governments are installed by means of elections, indicating public acceptance of their presence and a representation of their will. Dogan (1992) offered the following definition 'people hold the belief, that ... institutions are appropriate or morally proper'. ...read more.

This explores the way that minority interests are sidelined in order to speed up the policy process. Indeed, many sectional interests should be consulted in framing policy that renders it slow with an outcome little more than the lowest common denominator. To overcome this, the EU streamlines the consultation process and resorts to quantitative majority voting in order to 'steamroller' the minorities. Furthermore, it has been noted that the legitimacy of the EU institutions is questionable. In particular, the commission, responsible for policy initiation and law making, has no direct democratic mandate. This is compounded by speculation of fraud and corruption that was confirmed by the report from the College of Commissioners (1999). The Council of Ministers, responsible for making decisions, also lacks a democratic mandate since the people elect it indirectly. It consists of representatives sent by the legislatures of member states. Therefore, if the people do not elect it directly, its legitimacy is highly suspect since there has been no expression of their will. The question of legitimacy has also been asked of the European Parliament, since turnout for its' elections is very low. Public opinion is a further and significant feature of the democratic deficit. ...read more.

Its main policy-making institutions (the commission and council of ministers) are indirectly elected and lack a sense of accountability in the same way as the Governments of member states. A weak European parliament and an interdependence rather than separation of powers create a poison of secrecy that infects the liquid of policy-making. Nevertheless, the democratic deficit is judged in terms of the Western meanings of the words 'legitimacy' and 'democracy', words devised to apply to the workings of the national governments. The problem with this is that the EU is a unique concept unparalleled anywhere in the world. The psychological aspect of the democratic deficit relates to the way these words are taken out of context. The EU is not a national Government, as the 'United States of Europe' does not exist. To judge it on the same wavelength as a national Government is unfair. Furthermore, the EU is becoming more democratic through slow and incremental change, while its increasing importance brings growing opposition and subsequent accountability. The democratic deficit does exist in the structural features of the decision-making system and barriers to citizen participation. Yet hope remains once the mission of democratising political space above the level of the state is achieved. 1567 words. ?? ?? ?? ?? 1 ...read more.

This is a good summary of the institutional aspect of the democratic deficit. However, it doesn't really define the other half of the question - 'psychological' or sum up arguments on both sides. The argument needs to be stronger and more deliberative in order to hit the top marks.