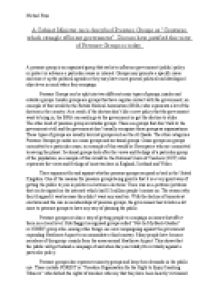 ﻿Michael Hope A Cabinet Minister once described Pressure Groups as ?Creatures which strangle efficient government?. Discuss how justified this view of Pressure Groups is today. A pressure group is an organised group that seeks to influence government (public) policy or protect or advance a particular cause or interest. Groups may promote a specific issue and raise it up the political agenda or they may have more general political and ideological objectives in mind when they campaign Pressure Groups can be split into two different main types of groups, insider and outsider groups. Insider groups are groups that have regular contact with the government; an example of this would be the British Medical Association (BMA) who represents a lot of the doctors in the country. As a result, if the doctors don?t like a new policy that the government want to bring in, the BMA can easily go to the government or get the doctors to strike. The other kind of pressure group is outsider groups. These are groups that don?t talk to the government at all and the government don?t usually recognise these groups as organisations. These types of groups are usually terrorist groups such as the Al Qaeda. ...read more.

Pressure groups are known as being especially democratically organised. An example of this would be ?Fathers for Justice? Matthew O'Connor- the founder of the group- said that instead of only the main people in the group thinking of ideas for protests and the rest of the members having to agree to that idea, O?Conner said that the ordinary members were usually the people who thought of the maddest ideas for protests. However, one of the planned protests was to kidnap the then Prime Minister, Tony Blair?s son, O?Conner said that he would not support such a idea and so terminate it, Finally Pressure Groups can make a huge different with a lot of things. When the ?Make Poverty History? campaign started, a lot of the poorest countries in the world had debts that made it that they could hardly even afford to pay back the interest on the debts. After the many concerts around the world, the ?G8? countries decided to cancel all debt for the poorest countries in the world. Also, ?Fathers for Justice? were able to change the laws so that fathers can have more time with their children. If it wasn?t for these things, many people could be still very disadvantaged in the world. ...read more.

An example of this happening would be the incident at Brent Spa. Greenpeace were angry because BP wanted Brent Spa (an oil refinery based in the North Sea) to be allowed to just sink into the sea. Greenpeace said that the sinking would mean a lot of oil would spill into sea causing major problems for sea animals. As a result, some Greenpeace protestors got on board Brent Spa and said they weren?t coming off until BP allowed the refinery to be brought into a harbour and broke into pieces. A while later BP gave in and allowed this to happen. Finally, Pressure Groups create silent minorities in society. These include people who smoke in Britain. Now that the government have banned smoking in public places, all smokers now have a stigma attached to them. To make matters worse- whereas groups against smokers have loads of pressure groups to join- smokers only have one prolific group, FOREST. In conclusion, Pressure groups help to maintain the pluralism in our democracy. This means that for every pro pressure group, they?ll always be a pressure group against the same issue. This keeps the balance of society in tact and this is why Pressure Groups are an important part of society and government on a local and national level. ...read more.