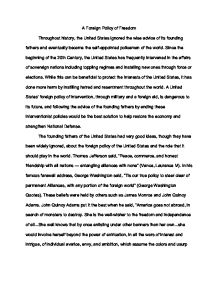 A Foreign Policy of Freedom. A United States foreign policy of intervention, through military and a foreign aid, is dangerous to its future, and following the advice of the founding fathers by ending these interventionist policies would be the be

A Foreign Policy of Freedom Throughout history, the United States ignored the wise advice of its founding fathers and eventually became the self-appointed policeman of the world. Since the beginning of the 20th Century, the United States has frequently intervened in the affairs of sovereign nations including toppling regimes and installing new ones through force or elections. While this can be beneficial to protect the interests of the United States, it has done more harm by instilling hatred and resentment throughout the world. A United States' foreign policy of intervention, through military and a foreign aid, is dangerous to its future, and following the advice of the founding fathers by ending these interventionist policies would be the best solution to help restore the economy and strengthen National Defense. The founding fathers of the United States had very good ideas, though they have been widely ignored, about the foreign policy of the United States and the role that it should play in the world. Thomas Jefferson said, "Peace, commerce, and honest friendship with all nations - entangling alliances with none" (Vance, Laurence M). ...read more.

The costs of these wars to date have been about 1.283 trillion dollars (United States). Other costs include the loss of lives by both American forces and innocent civilians. The costs have been high and the results have shown little or no success besides the death of Osama Bin Laden. Al-Qaeda and the Taliban are still growing stronger and spreading and Iraq and Afghanistan are still in chaos. With little result, and high costs, the logical reaction would be to pull out and return home. Foreign Aid is a major flaw in United States' foreign policy that costs it billions of dollars and does less good than harm. The United States gives foreign aid for mainly humanitarian purposes and for security or economic interests. Regardless of the motives, the idea of the United States government giving other countries money is wrong. It's not constitutional, it frequently doesn't achieve its purpose, it's often questioned, and it just doesn't make sense especially considering the current state of the economy. Humanitarian purposes often are the justification for aid, but rarely if ever does the money given work to achieve its goal. ...read more.

The most significant example is United States aid to extremists including Osama Bin Laden, "Between 1978 and 1992, the US government poured at least US$6 billion (some estimates range as high as $20 billion) worth of arms, training and funds to prop up the Mujaheddin factions" (Dixon, Norm). The purpose of this aid was to protect US interests by combatting the Soviet Union in Afghanistan, but this would prove to backfire on the United States in the attacks on September 11th. The foreign policy of intervention that the United States has practiced from the mid-20th Century to the early 21st Century has been extremely harmful to itself. The solution is too simple, and the outcome would be very beneficial. End the interventionist policies including the wars and foreign aid. This would free up billions that could be used to boost the economy through lowering taxes and through domestic spending. Ending the wars would bring the military, which is spread thin around the world, back to the United States which could help to secure the borders and build up defense from the threat of foreign attacks. A foreign policy of freedom, peace, and commerce is the best solution to the current issues that the United States faces. ...read more.