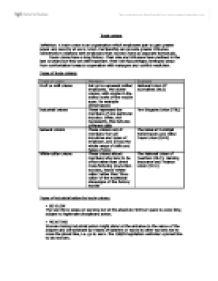 Trade unions Definition: A trade union is an organisation which employees join to gain greater power and security at work. Union membership can provide greater influence collectively in relations with employers than workers have as separate individuals. Trade unions have a long history. Their size and influence have declined in the last 20 years but they are still important. Their role has perhaps developed away from confrontation towards cooperation with managers and conflict resolution. Types of trade unions: Trade of union Members Example Craft or skill unions Set up to represent skilled employees. The oldest unions, with origins in the skilled crafts of the middle ages, for example stonemasons National Union Of Journalists (NUI) Industrial unions These represent the members of one particular industry. Often, not necessarily, this includes different skills Fire Brigades Union (FBU) ...read more.

* SECONDARY PICKETING Picketing an employer's premises other than the one directly involved in the dispute. This was finally outlawed in 1990. * STRIKE The workforce simply fails to report to work * WORK TO RULE The workforce applies to the employer's own rules and procedures 'to the letter'. An example would be a train driver who insisted on following the checking procedure in the driver's manual before taking the train out of the station. The driver could not be criticised but inevitably delay or cancel the train. Union legislation in the 1980's and 1990's Employment Act 1980 * Employers no longer obliged to recognise or negotiate with a particular trade union or unions * Picketing restricted to own place of work and illegal if elsewhere, so that the employer could take civil legal action against secondary picketing * Secondary action limited to a direct supplier or customer * New 'closed shops' ...read more.

members * Employers can now dismiss any worker taking part in an unofficial strike without the employee having the right to complain to an industrial tribunal for unfair dismissal Trade Union Reform and Employment Rights Act 1993 * Trade unions to give employers seven days' notice of official action * Creates a new 'citizens right' to restrain unlawfully organised industrial action, making unofficial strikes harder to undertake * Abolishes the remaining wages councils and their statutory minimum pay rates ACAS 'ACAS' stands for Advisory, Conciliation and Arbitration Service. Founded in 1975, the mission statement of ACAS is: To improve the performance and effectiveness of organisations by providing an independent and impartial service to prevent and resolve disputes and to build harmonious relationships at work. ACAS seeks to: * Prevent and resolve employment disputes * Conciliate in actual or potential complaints to industrial tribunals * Provide information and advice * Promote good practice. ...read more.