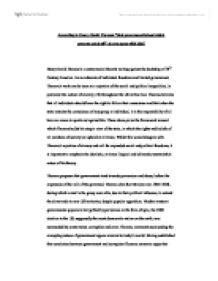 According to Henry David Thoreau &quot;that government is best which governs not at all&quot; do you agree with him?

According to Henry David Thoreau "that government is best which governs not at all" do you agree with him? Henry David Thoreau's a controversial theorist writing against the backdrop of 19th Century America. As an advocate of individual freedoms and limited government, Thoreau's work can be seen as a rejection of the social and political inequalities, in particular the culture of slavery, rife throughout the US at this time. Thoreau believes that all individuals should have the right to follow their conscience and that when the state restricts the conscience of any group or individual, it is the responsibility of all how are aware to speak out against this. These ideas prove the framework around which Thoreau builds his utopia view of the state, in which the rights and beliefs of all members of society are upheld at all times. Whilst few would disagree with Thoreau's rejection of slavery and call for expanded social and political freedoms, it is important to emphasis the idealistic, at times illogical and ultimately unattainable nature of his theory. Thoreau proposes that governments tend towards perversion and abuse, before the expression of the will of the governed. ...read more.

In other words Thoreau envisages the ideal state as that which does not infringe upon the inner beliefs of any of its citizens. Thoreau is not suggesting anarchy but instead a vision in which governments constantly strive to remove those features which conflict with the conscience of its members. Whilst Thoreau's argument at first sight appears appealing due to its emphasis upon individual freedom from restraint it is also highly idealistic. The complexity and size of modern state makes it impossible for all citizens to articulate their particular grievance with the political establishment effectively. Additionally, even if the state were able to see before it the conscience of all its citizens, it would still be impossible to reconcile the vast plurality of religious, political and economic convictions that exist within the modern state. This point is illustrated by Marx in his work in 'Marx-Engels reader' on 'the Jewish question' in which he argues that a Jew living within a Christian state can never be free as long as he remains a Jew, for his interests will inherently clash with those of the Christian state because they hold different moral convictions, for Marx this situation is reconciled via ...read more.

Weber's conception of the state is not without problems, this however is not our subject matter, and instead Weber's work is useful as it exposes the unworldly idealism contained within Thoreau's theoretical vision of the state. Thoreau's struggle against the suppression and torture of the US slave trade during the Mexican war is commendable; however the theory he used to reject slavery is not as appealing. Within today's political climate the rights and freedoms of citizens are surprised in a far more limited way than was the case when Thoreau wrote. However it is still nothing but fanciful to imagine that all citizens could follow their conscience without irreconcilable conflicts arising that in their resolution will have a winner and a loser. Whilst it is clear that government are always potentially and often actually corruption and that the freedoms of some individuals will be restricted by the state, at least on some issues. Rather than seeking to remove these inherent problems of rule it is preferable to argue that the state should ensure that no individual, minority or majority group should be able to dominate the political agenda at all times. This grounds Thoreau's desire to maximise freedom of ones conscience from coercion within the world of modern politicians. ...read more.

3 Stars - There are several strengths of this piece. It is articulately written, explaining Thoreau's key beliefs intelligently, and evaluating them in comparison to other political ideas and events. Where this essay could be improved is with greater use of primary supporting material instead of paraphrasing. The conclusion only really addresses the question implicitly.