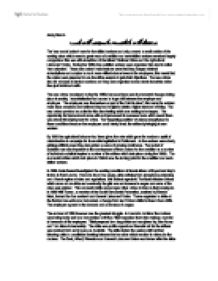 Account for the development of Trade Unions for the unskilled

Jenny Mason Account for the development of Trade Unions for the unskilled The 'new model unions' were for the skilled workers and only covered a small section of the working class which meant a great mass of unskilled and semi-skilled workers remained largely unorganised this was with exceptions of the Miners' National Union and the Agricultural Labourers' Union. During the 1880s the unskilled workers were organised into what is called 'new unionism'. These new unions' main features were that they charged minimal subscriptions and adopted a much more militant stance towards the employers; this meant that the unions were prepared to use the strike weapon to gain their objectives. The new unions also did not seek to exclude workers and they were organised across whole industries rather than just individual crafts. The new unions developed during the 1880s because there were fundamental changes taking place in society. Industrialisation had caused a huge drift between the employer and employee. The employers saw themselves as part of the 'middle class'; this made the workers more class conscious and believed they had to fight to obtain a higher standard of living. ...read more.

The strike won public support and financial aid for the strikers was received from as far away as Australia. The strike lasted five weeks until Cardinal Manning called a conciliation meeting between the two sides which resulted in victory for the dockers. The Dock, Wharf, Riverside and General Labourers Union was formed after the strike under the leadership of Tillett and Mann and within two months they had gained a membership of 30,000 men. The immediate effect of these strikes was a rapid growth in trade union membership and an increase in the number of disputes as the unions tested their strength. Trade union membership grew rapidly from 750,000 in 1888 to 2,000,000 in 1900. The Miners' Federation of Great Britain was a large union which was formed during this period. The employers were faced with foreign competition and were determined that the new unions should not dictate terms to them so used the 'lock-out' as a tactic. An employers' counter-attack was deliberately conceived with the organisation of Employers' Federations; these federations also co-ordinated lock-outs to defeat strikes. In 1877 the Employers' Parliamentary Council was formed. The council's objective was to influence parliament over the employers' case, they used propaganda arguing that the unions were damaging the British economy. ...read more.

This was a major blow to trade unions itself but then the company decided to take the Amalgamated Society of Railway Servants to court and sued for damages to compensate the loss of revenue during the strike. The Amalgamated Society of Railway Servants ended up paying �23,000 to the company and the costs of the case; this was a crushing blow to trade union aspirations as people feared that future strikes in the industry could suffer the same fate. The Labour party started to increase its recognition and in 1906 the Liberal Government became under pressure form the 29 Labour Party MPs, this caused the Government to revoke the Taff Vale Judgment by introducing a Trade Disputes Act. This Act made picketing a legal activity once again and said, "An action against a Trade Union . . . in respect of . . . damages . . . shall not be entertained by any court," this removed the 'cloud' of the Taff Vale case. The Osbourne case and judgment which happened in 1908-9 was also nullified by two acts. These acts were the 1911 Payment of Members Act and the 1913 Trade Union Act. Therefore on the eve of the First World War trade unions had overcome all legal obstacles; they now had the right to picket, the power to strike and play an important role in politics. ...read more.