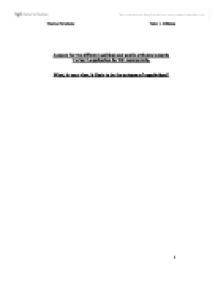 Account for the different political and public attitudes towards Turkey's application for EU membership.

Account for the different political and public attitudes towards Turkey’s application for EU membership.

What, in your view, is likely to be the outcome of negotiations?

Turkey first applied to join the EU was in 1987. Turkey was then made  a European Union Associate Member in 1964. It was officially recognised as a candidate for membership in 1999 at the Helsinki sumit for the European Council. Turkey recently started negotiations in 2005 , this started a chain of events which lead to many differing public opinions, such as:

The people of the EU countries are generally cautious of full Turkish membership as shown in the graph in Appendix 1. Only Hungary (51%) closely followed by the UK (46%), Portugal (43%) and Spain (42%) show substantial support for Turkish EU membership. The EU average supporting view is only 36%.

The Turkish public saw this as prejudice and discrimination, with the Prime Minister, (Tayyip Erdogan-Leader of the Justice and Development party) stating that "The EU decision is an injustice against Turkey”. Many influential people in Turkey, such as Guler Sabanci, the richest woman in Turkey and a leading industrialist, claim that criticisms made by the European Commission are the same as the current agenda in the Turkish government and all they need is time to reform.

Many European countries do not agree with Turkey joining the EU in the near future. The primary concerns of the European public and their representative governments

Tony Blair and other strong supporters of Turkey’s European aspirations, argue that the EU has a lot to benefit from full Turkish membership. These arguments are summarised below.

If Turkey is to join the EU it is my belief that they will have to make drastic changes in their views on human rights, and they will also have to admit to the atrocities they committed against the Armenian people, the French and Austrian governments will not accept Turkey into the EU until it admits committing genocide against the Armenian race. (Jon Gorvett) “With the French parliament passing in early October a resolution to make denial of the Armenian genocide a crime support in Turkey for the European Union--of which France is such an important symbol--has never been more dismal. Widespread leaks, and a condemnatory version of the report from the European Parliament, had left little doubt in Turkey that this year's end-of-term grade would have a definite "could do better" ring to it.”

Some trade unions and many workers are concerned about the potential free movement of workers from Turkey. Socio-economical issues like immigration need also to be talked in the EU-Turkey agreement. More than 3 million Turkish people have in the past 50 years emigrated to Europe to seek a better future. There is widespread unease in countries with strong Turkish minorities like Germany, Austria, Denmark etc, at the prospect of free movement of 70 million Turks

I believe that Turkey will inevitably join the EU at some stage or another. It is just a matter of how much of its ideals it is willing to give up for the sake of becoming part of the world’s largest multi-country market in the world (Steven A. Cook) “it will probably take at least a decade for these negotiations to conclude. He notes that, even though the current Turkish government has passed a series of economic and legal reforms needed to qualify for membership, they have yet to be implemented. And, he says, considerable anti-Turk sentiment lingers in several European nations.” 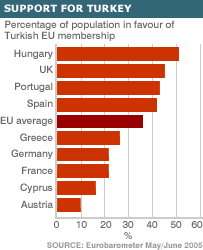 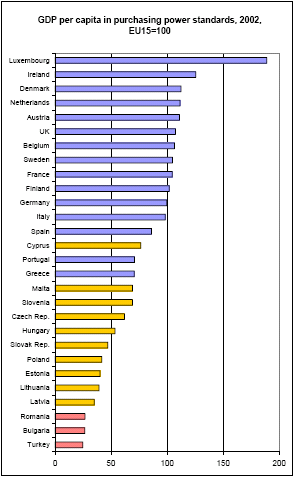 [1] The Ankara Protocol was signed in 2004 and calls on Turkey to extend free trade to all new EU members as a pre-condition to accession talks. Turkey is now refusing to implement it in the case of Cyprus.

[2] The breakaway pseudo state in north Cyprus resulted from the Turkish Invasion of Cyprus in 1974, following a coup by the Greek junta against the legitimate government of President Archbishop Makarios, and is only recognised by Turkey.

[3] The present Pope’s view was against Turkish membership of the EU while he was a Cardinal, though his has since rescinded his views.