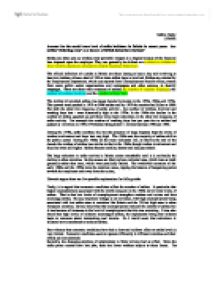 Account for the much lower level of strike incidence in Britain in recent years. Are strikes 'withering away' as a feature of British industrial relations?

Debbie Hardy 15/05/02 Account for the much lower level of strike incidence in Britain in recent years. Are strikes 'withering away' as a feature of British industrial relations? Strikes are often seen as workers most powerful weapon in a dispute because of the financial loss imposed upon the employer. They can generally be defined as a 'collective withdrawal from work by employees intended to modify employer behaviour'. The official definition of a strike in Britain are those lasting at least a day and involving at least ten workers, unless a total of 100 or more striker days is involved. Strikes are counted by the Employment Department, which uses reports from Unemployment Benefit offices, returns from some public sector organisations and newspapers and other sources, to identify stoppages. There are three main measures of strikes: the number of separate stoppages; the number of workers involved; and the number of days 'lost'. The number of recorded strikes was larger decade by decade in the 1950s, 1960s and 1970s. The upward trend peaked in 1970 at 3906 strikes and by 1979 the number had fallen to 2080. But both the other two measures of strike activity - the number of workers involved and working days lost - were historically high in the 1970s. In the 1980s the decline in the number of strikes speeded up and there were major reductions in the other two measures of strike activity. ...read more.

Not only would the collaborative culture of 'beer and sandwiches at 10 Downing Street' end - a frontal attack to smash the militants' section of the trade unions would be launched. The Thatcher government saw its polices in the origins in the New Right, with its emphasis on the free working of markets and the need to minimise state interferences. As union bargaining strength was considered to stem from immunities in relation to industrial action and the 'coercive poor' of the closed shop these became central targets to the government's legislative programme. A policy of enterprise 'confinement' was pursued in restricting the scope of lawful industrial action. Immunities were seen by the government as unique 'privileges' putting trade unions 'above the law', and were narrowed significantly by successive pieces of legislation. As part of the government's step-by-step approach, the stream of Acts of Parliament since 1980 in dealing with trade unions altered the legal position of strikers and their unions. Over powerful unions were, in the eyes of the Conservative Party, too ready to use strikes to get their way: 'strikes are too often a weapon of first rather than last resort' (Conservative Party Manifesto, 1979). Strikes had become for the Conservative Party, the symbol of the abuse of their power by trade union. The 1982 Act on strikes made key alteration in the law, which severely reduced trade union immunity from legal action. If the unions were to avoid losing immunity, they would have to give up certain types of strike action. ...read more.

'Pendulum arbitration' (forced choice) is often seen as a solution but it is of limited value in practice. It is not good for multi issue disputes and is unhelpful for long-term relationships. The main reasons for the decline in strike activity then since 1979 appear to have been economic rather than the result of legislation. Rising unemployment between 1979 and 1986, and again between 1989 and 1993, reduced the willingness of employees to take strike action. This was accompanied by a significant restructuring of the economy, with a decline in strongly unionised and more strike prone traditional industries and a growth in poorly unionised and less strike prone service industries. Although strikes are much less frequent by any measure say than in the 1970s, they don't appear to be withering away. They still remain an important weapon for employees to put pressures on their employers. Recently, in Britain strikes have become more popular in the public services, eg in rail services. Furthermore, with Tony Blair following to a large extent the free market ideology of Thatcher, less regulation for workers may mean workers feel a greater need for strikes over pay and conditions. In conclusion therefore, various causes of the reduction of strike levels have acted in combination. Economic pressures, the changing distribution of employment and organisation change within the firm exerted the most clear cut effects. Changes in the law may have had a less direct influence, though it is hard to disentangle their effects from wider political forces. ...read more.