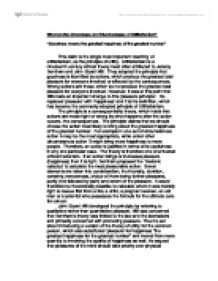 Advantages and disadvantages of utilitarianism

What are the Advantages and Disadvantages of Utilitarianism? "Goodness means the greatest happiness of the greatest number" This claim is the single most important teaching of utilitarianism, as the principle of utility. Utilitarianism is a nineteenth century ethical theory most often attributed to Jeremy Bentham and John Stuart Mill. They adopted the principle that goodness is identified by actions, which produce the greatest total pleasure for everyone involved or affected by the consequences. Wrong actions are those, which do not produce the greatest total pleasure for everyone involved. However, it was at this point that Mill made an important change to this 'pleasure principle'. He replaced 'pleasure' with 'happiness' and it is his definition, which has become the commonly adopted principle of Utilitarianism. The principle is a consequentiality theory, which holds that actions are made right or wrong by what happens after the action occurs- the consequences. The principle claims that we should choose the action most likely to bring about the greatest happiness of the greatest number. ...read more.

He claimed: 'it is better to be a human being dissatisfied than a pig satisfied'. The fact that the principle of utility can be applied universally, to any situation also works in favour of this ethical theory. As too does the fact that it is relatively straightforward, constantly weighing up happiness and consequences. The Principle encourages a democratic approach in decision-making, which is also seen as an advantage. The majority's interest is always considered and a dangerous minority is not allowed to dominate. However, everyone's happiness is taken into consideration and for this reason it is observed that nobody's happiness is more important than anyone else's. The theory also appeals to theists as its principles are compatible with the teachings of Jesus, who preached an ethic of love, requiring men to work for the well being of others. 'Do to others as you would have them do to you'. ...read more.

However, we cannot solve every dilemma by reference to one ethical theory because every situation is unique in some way. Furthermore, values such as justice have no relevance, as the majority may not support that view and not every action done out of good will is going to result in good consequences. The theory also makes no allowance for personal relationships, for example if a man's wife were dying in a fire, reason would not tell him not to rescue a scientist with a cure for cancer first but his wife would be his first priority. We have duties to those whom we love which will always be more important to us than duties to a society we do not know. The amount of critics as opposed to supporters seem to suggest that there are a number of flaws in the principle of utility which have failed to be addressed in future developments of the theory. In principle the theory does appear to be practical, however, in reality it is debatable whether it would be a workable ethic. ...read more.