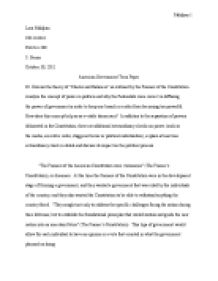 American Government Term Paper #1. Discuss the theory of Checks and Balances as outlined by the Framers of the Constitution.

﻿Maldjian Lara Maldjian C01116416 Poli Sci 180 S. Frame October 30, 2012 American Government Term Paper #1. Discuss the theory of ?Checks and Balances? as outlined by the Framers of the Constitution. Analyze the concept of power in politics and why the Federalists were correct in diffusing the power of government in order to keep one branch or entity from becoming too powerful. How does this concept help us as a viable democracy? In addition to the separation of powers delineated in the Constitution, there are additional extraordinary checks on power (such as the media, executive order, staggered terms or political mobilization), explain at least one extraordinary check in detail and discuss its impact on the political process. ?The Framers of the American Constitution were visionaries? (The Framer?s Constitution), or dreamers. At the time the Framers of the Constitution were in the development stage of forming a government, and they wanted a government that was ruled by the individuals of the country, and they also wanted the Constitution to be able to withstand anything the country faced. ?They sought not only to address the specific challenges facing the nation during their lifetimes, but to establish the foundational principles that would sustain and guide the new nation into an uncertain future? (The Framer?s Constitution). This type of government would allow for each individual to have an opinion or a vote that counted in what the government planned on doing. The text of the Constitution reflects the vision the Framers had. It defines our most essential freedoms in general terms: ?freedom of speech,? ?due process of law,? ?free exercise? of religion, ?equal protection of the laws,? ?cruel and unusual punishment.? The Constitution sets forth governmental powers in similarly general terms: Congress may regulate ?commerce?among the several states,? the president will ?take ...read more.

It requires restraint, wisdom, empathy, intelligence, and courage. Above all, it requires recognition of the judiciary?s unique strengths and weaknesses, a proper appreciation of the reasons for judicial review, and a respectful understanding of our nation?s most fundamental constitutional aspirations and how we hope to achieve them (The Framer?s Constitution). It is important to realize that the Constitution was written during a time when there was a lack of structure and stability in the nation. It was written to bring that structure and stability for the people, and to guide us to do what the framers believed was appropriate at the time. #3. Review in detail the basic Civil Liberties outlined in the ?Bill of Rights?. Explain how these rights have evolved and changed over the past 200 years. Analyze the Fourteenth Amendment and explain the impact that it has on the Civil Liberties outlined in the ?Bill of Rights?. Take a specific issue(s) (such as gun control, free speech, voting, gay marriage etc.) and relate this issue with the Constitution. Provide an argument in favor of adding too or changing the Bill of Rights. Civil liberty is areas of personal freedom with which governments are prevented from interfering. ?The Declaration of Independence defined three inalienable rights: ?life, liberty, and the pursuit of happiness?? (We the People). Civil liberties are continuously a focus for ?judicial interpretation?, their requirements are delicate, and need to be very carefully protected, especially during a time of threat to national security or war (We the People). Both civil liberties and civil rights are very similar. ?They both relate to the ability of citizens to exercise personal freedoms and because they both arise from the Fourteenth Amendment? (We the People). Civil Liberties as outlined by the Bill of Rights are what guarantee average citizens their freedom. ...read more.

Free speech is the First Amendment in the Bill of Rights. ?Congress shall make no law respecting an establishment of religion, or prohibiting the free exercise thereof; or abridging the freedom of speech, or of the press; or the right of the people peaceably to assemble, and to petition the Government for a redress of grievances (We the People). Although we have freedom of speech, it is limited and some things are not protected by this amendment. Libel and slander, obscenity and pornography, fighting words, and commercial speech are not protected by the First Amendment (We the People). I believe that the Bill of Rights needs to change as the times change. 200 years ago they did not have the issues of searching people when going through the airport because of the fear that there might be some kind of danger. There are certain rights that are just as relevant now as they were 200 year ago, yet the ones that no longer pertain to us should be taken out and replaced with new ones that would serve the people of our better. The Patriot Act which was enacted to protect citizens from terrorism seems like it has limited basic rights more than it has protected. Citizens are passing up their rights in order to feel protected. Although, there are people out there that feel giving up certain rights are necessary for the greater good. If I could change the Bill of Rights I would just make a little more relevant to the issues of today, and have rights in there that would benefit citizens. With so many different events going on today it is a hard to have rights that were from 200 years ago, be applicable today. Although, many of them are relevant, they need to be amended so they can be as close as possible to our current situation in our country. ...read more.