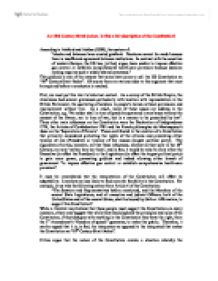 An 18th Century Strait-jacket - Is this a fair description of the Constitution?

An 18th Century Strait-jacket. Is this a fair description of the Constitution? According to Ashford and Ashbee (1999), the system of: "checks and balances have created gridlock. Decisions cannot be made because there is insufficient agreement between institutions. In contrast with the countries of western Europe, the US has, [critics] argue, been unable to impose effective gun control or establish comprehensive health-care provision because decision making requires such a widely shared consensus." This gridlock is one of the reasons that some have come to call the US Constitution an "18th Century Strait-Jacket". Of course there are various sides to this argument that must be explored before a conclusion is reached. First, we must put this into its historical context. As a colony of the British Empire, the Americans had several grievances particularly with taxation with representation in the British Parliament, the quartering of soldiers in people's homes without permission and imprisonment without trial. ...read more.

While a literalist may believe that these people must support the Constitution on every occasion, others may suggest that while they should uphold the principles and rules of the Constitution, if they disagree with anything in the Constitution they have the right, from the 1st Amendment's "freedom of speech" guarantee, to make this public. Therefore, it can be argued that it is, in fact, the interpreters as opposed to the interpreted that makes the Constitution an "18th Century Strait-Jacket". Critics argue that the nature of the Constitution creates a situation whereby the Constitution acts as a 'Strait-Jacket', restricting Representatives getting on with their work but rather concentrating on upcoming elections. This is can be substantially evidenced as truth but perhaps overall it is an advantage. If the Representatives are constantly looking towards approaching elections they may become more 'in tune' with their mandate and give the people what they want rather than what he/she or their party thinks the people should want. ...read more.

By the 1960s - when the Vietnam War was fought - the president had undoubted primacy or hegemony in the handling of defence policy and national security matters." Hence, Arthur Schlesinger Jr described the 1960s as the era of the 'imperial presidency'. Ashbee and Ashford continued to demonstrate that "Congress - although sometimes vocal in its comments - played a subordinate role". Therefore, it can be said the Constitution is not as restricting as critics would lead us to believe because power has gradually evolved towards the President. It is important also to compare the US Constitution to other Constitution. The British Constitution most notably, is not codified or entrenched. It is much easier to change this Constitution - through an Act of Parliament, a court ruling or an EU law in comparison to the US, an amendment of which requires a 2/3 majority in both houses and the approval of 3/4 of the states. Nevertheless, while Britain may seem to have more 'power' over her country than the US's "18th Century Stait Jacket" ...read more.