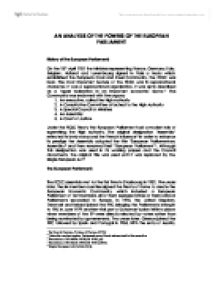 An Analysis of the Powers of the European Parliament.

AN ANALYSIS OF THE POWERS OF THE EUROPEAN PARLIAMENT History of the European Parliament: On the 18th April 1951 the Ministers representing France, Germany, Italy, Belgium, Holland and Luxembourg signed in Paris a treaty which established the European Coal and Steel Community, the ECSC was born. The most important feature of the ECSC was its supranational character, it was a supranational organization. It was aptly described as a 'quasi federation in an important economic sector.1 The Community was endowed with five organs; 1. An executive, called the High Authority 2. A Consultative Committee attached to the High Authority 3. A Special Council of Ministers 4. An Assembly 5. A Court of Justice Under the ECSC Treaty the European Parliament had a modest role of supervising the High Authority. The original designation 'Assembly' reflected its lowly status and the French influence2 In order to enhance its prestige the Assembly adopted the title 'European Parliamentary Assembly,3 and then renamed itself 'European Parliament'4. Although this designation was used in its working papers and the Council documents, the original title was used until it was replaced by the Single European Act5 The European Parliament: The ECSC assembly met for the first time in Strasbourg in 1952. Five years later, the six member countries signed the Treaty of Rome to create the European Economic Community, which included a European Parliament of 142 members, all of them representatives of their national Parliaments seconded to Europe. In 1973, the United Kingdom, Denmark and Ireland joined the EEC bringing the Parliaments strength to 198. In June 1979 another vital part of Schuman's plan fell into place when members of the EP were directly elected by voters rather than being nominated by governments. Two years later, Greece joined the EEC followed by Spain and Portugal in 1986. With the entry of Austria, Finland and Sweden in 1995, the European Parliament was expanded to its present size of 626 members. ...read more.

The cooperation procedure After the Members of the European parliament were directly elected in 1979 the Community institutions were seen to be undemocratic as the only body that was accountable to the electorate played a very small part in the legislative process. The EP commissioned a report on the constitutional reform of the Community. That report the Spinelli Report was issued in 1984 and although many of its recommendations were not taken up an attempt was made in the SEA to address the issue of Parliamentary input into the legislative process This was known as the cooperation procedure. Under the consultation procedure the Council could take a final decision after the EP has issued its opinion, under this procedure there is a second reading. On the first reading the Council is confined to adopting a 'common position' it must then be referred back to the EP with an explanation of its common position including reasons for any EP amendments that have been rejected. The EP can exert further pressure at its second reading by amending or rejecting the common position by an absolute majority vote. Votes such as those do not amount to vetoes, but they can carry considerable political weight, and they can only be overcome in the Council by a unanimous vote, they put a great deal of pressure on both the Commission and the Council to take the views of the EP seriously. The Co-decision procedure This procedure is similar to the cooperation procedure until the EP issues its second reading except under a change made by the Treaty of Amsterdam if the EP and the Council reach agreement on the proposal at the first reading, the proposal can be adopted at that stage. Should the EP and the Council still disagree after the second reading, if the EP has rejected it by an absolute majority the proposal will fall and it is referred to a conciliation committee. ...read more.

Supervisory powers of the European Parliament: Articles 193 - 201 give the Parliament the following supervisory powers 1. It can set up Committees of inquiry to investigate alleged maladministration (Article 193). 2. It may receive petitions from EU citizens (Article 194). 3. It mat appoint an ombudsman to investigate complaints by EU citizens (Article 195) 4. It has the right to put questions to the Commission at Parliamentary debates and Committee meetings (Article 197) 5. It may question the Council at Parliamentary debates (although the Council determines its own attendance at such debates) (Article 197) or in writing (Article 25 of the Councils Rules of Procedure as adopted by Council Decision 93/662/OJ 1993 L304/1) 6. It has the right to debate the Commissions annual report (Article 200) 7. It can by a two thirds majority, require the whole Commission to resign(Article 201) The Parliament has two other supervisory powers they are as follows 1. it must approve the incoming Commission 2. It may initiate proceedings before the Court of Justice in respect of certain Act or omission by the other institutions (Articles 230 and 232) Virtually all Parliaments experience difficulties in exercising supervisory powers over executives. They do not welcome the prospect of being investigated and seek to protect themselves behind whatever constitutional, institutional or party political defences are available 1 By Guy de Carmay, Fortune d'Europe (1953) 2 Under the ancient regime, Parlements were Courts subservient to the executive 3 Resolution of 20 March 1958 (OJ 1958, p6) 4 Resolution of 30 March 1962 (OJ 1962 p1045) 5 Single European Act (Article 3(1)) 6 OJ 1999 L202/1 7 Case 230/81: Luxembourg v European parliament [1983] ECR 255 8 Roquette Freres v Council (Case 138/79) 9 European parliament v Council (Case C-65/90) 10 European Parliament v Council (Case C-388/92) 11 European parliament v Council (Case C-65/93 12 European Parliament v Council (Case C 417/93) ...read more.