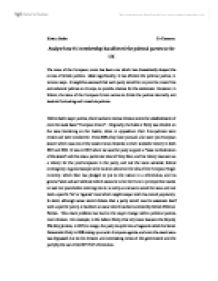 Kirstin Stobo Dr Cameron Analyse how EU membership has affected the political parties in the UK The issue of the European union has been one which has dramatically shaped the course of British politics. Most significantly, it has affected the political parties, in various ways. It might be assumed that each party would be required to create firm and coherent policies on Europe, to provide choices for the electorate. However, in Britain, the issue of the European Union serves to divide the parties internally and leads to fluctuating and irresolute policies. Within both major parties, there has been intense division since the establishment of even the most basic "European Union". Originally, the Labour Party was divided on the issue bordering on the hostile, when in opposition; their Euro-policies were erratic and were incoherent. ...read more.

In short, although sense would dictate that a party would need to associate itself with a specific policy, it had been an issue which has been avoided by British Political Parties. This exact problem has lead to the major change within political parties, inner division. For example, in the Labour Party, this very issue has seen the Deputy PM, Roy Jenkins, in 1979, to resign, the party to split into a fragment called the Social Democratic Party in 1981 taking up an anti-European agenda, and even the exact issue was bypassed due to the division and contrasting views of the government and the party by the use of the 1975 'EU' referendum. This pattern is a similar one which can be seen in the Conservative Party. Traditionally, the Party were anti-European and were well known for their objections to any sort of European connections. ...read more.

The Liberal Democrats appeal to the federalist view and are united in their strong approval of the EU and the founding principles of such a body. They remain committed to the idea of central power lying within Europe, and this had been a constant policy since its foundation. The more nationalist parties, such as the Scottish or Welsh Nationalists they take an equally positive but less federal view, wishing to establish their own countries outright within Europe, disassociated from the UK, more generally they need to ensure European support if they were to become independent they would rely on their assistance to 'hold their own' within the international community. So it is clear that the European Union has had an important impact on the Political Parties of Britain, it is clear that it is a means of dividing the parties internally and the controversial EU will always cause constant debate. ...read more.