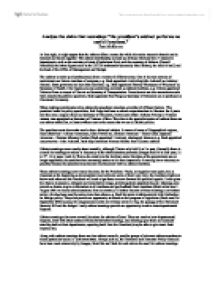 Analyse the claim that nowadays "the president's cabinet performs no useful functions." Tom McKeown. At first sight, it might appear that the cabinet offers a means by which the entire executive branch can be directed and drawn together. The cabinet membership is made up of those who head the 15 executive departments, such as the secretary of state (Condaleeza Rice) and the secretary of defence (Donald Rumsfeld) and other figures such as the US UN ambassador (currently John Bolton), the chief of staff, and the head of the Office of Management and Budget. The cabinet is made up of professionals from a variety of different areas. One of its main sources of recruitment are former members of congress, e.g. Bush appointed 4 including John Ashcroft as Attorney General. State governors are also often recruited, e.g. Bush appointed Tommy Thompson of Wisconsin as Secretary of Health. City mayors are also sometimes recruited as cabinet members, e.g. Clinton appointed Federico Pena ex mayor of Denver as Secretary of Transportation. Recruitments are also sometimes made from outside the political spectrum, Bush appointed Rod Paige as Secretary of Education an ex professor at Cincinnati University. When making recruitments to his cabinet the president considers a number of different factors. ...read more.

Bush Snr prior to Malta summit with Gorbachev on foreign policy. They also provide an opportunity to check on the progress of legislation (Bush used 24 September 2002 to press for congressional action on military action in Iraq, the passage of the Homeland Security Bill and the budget. Lastly cabinet meetings provide an opportunity to solve inter-departmental disputes. Cabinet meetings also serve several functions for cabinet officers. They can resolve inter-departmental disputes, meet with other cabinet officers before/after meetings, also meetings give them an increased standing back at their departments, reporting back from the President (may be able to give team fresh impetus etc). Along with cabinet meetings there are also cabinet councils, smaller groups of relevant cabinet members to discus particular issues i.e. sub committees. Groups such as, the Economic and Domestic Policy Councils have been used extensively by Reagan, Bush Snr and Bush Jnr and reduce the need for cabinet meetings. The cabinet officer's role is to run their department, not to act as the Presidents principal advisors (the role of the EXOP) and they do not have a great impact in determining policy, especially since the emergence of the EXOP. They must take account of a number of things; Congress, who controls their funds, their own departmental bureaucracy, interest groups with strong departmental links and perhaps most importantly the President himself. ...read more.

A further reason why it might be argued that the cabinet performs no useful functions in modern times is that cabinet members are not always selected on their capability to do the job, they may be picked for other reasons, for example, when Clinton selected his cabinet so that it would 'look like America'. However it can be argued that even in modern times Cabinet is important for a number of reasons. Firstly as individually they have large departments to run. Also, as Cabinet departments have massive amounts of money to spend. It should also be pointed out that some Cabinet departments/ Heads of cabinet are more important than others e.g. Donald Rumsfeld, Defence, Condoleezza Rice, Home Secretary. I believe that whilst it is not accurate to state that today cabinet "performs no useful functions" as it evidently is still important for a number of reasons (massive budget to spend etc) it may be accurate to say that the influence or even importance of the cabinet is dwindling, with in recent times, the increased use of the EXOP in terms of things like policy. However the cabinet's role is dependent on the President who ultimately has the say over how influential and important his cabinet will be in his administration. ...read more.